With the launch of the iPhone 7 in 2016, Apple debuted a new "Jet Black" color, which was a glossy, shiny finish that was a departure from the standard brushed aluminum finishes of the iPhones that preceded it. 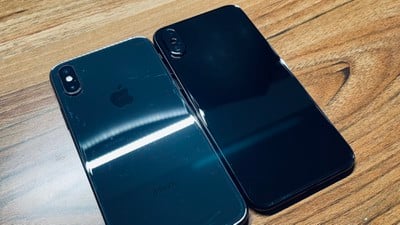 Jet Black was unique because of how dark it was in comparison to other "black" and "space gray" finishes at the time. Apple hasn't used the same Jet Black finish for another phone to date, but according to images shared today by leaker Mr. White, Apple tested a Jet Black ‌iPhone‌ X.

The ‌iPhone‌ X was available in a silver color that was close to white and a space gray color that was quite dark, but it was not as dark as the Jet Black color shown off in the prototype photos.

The alleged prototype device does not have an Apple logo or other certification marks, nor a finished camera design, but it is otherwise identical to an ‌iPhone‌ X. It's not clear if Apple will bring back the Jet Black colorway in the future, but Apple has been using a standard black color for the iPhone 11 and 12 models.

Let's be honest, the iPhone X is still the best looking iPhone that Apple has ever made, especially in Silver.
I would really have preferred this Jet Black to the Space Gray we got tho.

I still think the 4/4s where the best form factors of iPhone, followed by the iPhone 12. I just love that squared look.
Score: 23 Votes (Like | Disagree)

Let's be honest, the iPhone X is still the best looking iPhone that Apple has ever made, especially in Silver.
I would really have preferred this Jet Black to the Space Gray we got tho.

HeavenDynamic
Let's be honest, the iPhone X is still the best looking iPhone that Apple has ever made, especially in Silver.
I would really have preferred this Jet Black to the Space Gray we got tho.
Score: 12 Votes (Like | Disagree)

kalafalas
I had a Jet Black iPhone 7. Most beautiful iPhone I've had, especially after a year of no case I loved it so much. But man, leave that thing in the sun for .2 seconds and you get a temperature warning. That was a rough summer with no pictures ?
Score: 10 Votes (Like | Disagree)

I sometimes think about the 6 and wonder how can Apple have released something so ugly.
Score: 9 Votes (Like | Disagree)
Read All Comments

Monday February 1, 2021 5:41 am PST by Joe Rossignol
In celebration of Black History Month, Apple today released a limited-edition Black Unity Apple Watch Series 6 and a Black Unity Sport Band, both of which are now available to order in the United States and many other countries. The custom Apple Watch has a Space Gray aluminum case inscribed with the words "Black Unity" on the back. The watch comes with a Black Unity Sport Band that Apple...
Read Full Article • 19 comments

Sunday August 2, 2020 11:32 am PDT by Hartley Charlton
Twitter user @DongleBookPro has today posted images of what seems to be a first-generation iPod Touch prototype with a 2013 Mac Pro-style glossy black finish. The Twitter user claims that the iPod Touch prototype pictured has "the same coating as the 2013 Mac Pro." Had the finish been selected for the final product, it also would have been similar to the metallic glossy black finish that...
Read Full Article • 41 comments

Friday May 14, 2021 11:52 am PDT by Juli Clover
Following the discontinuation of the iMac Pro, Apple also appears to be discontinuing Space Gray "Magic" accessories that it sold separately alongside the iMac Pro. The iMac Pro was the only Space Gray Mac, and Apple designed special matching accessories for it. The Space Gray Magic Mouse 2, Magic Keyboard, and Magic Trackpad all now say "While supplies last" in small wording at the bottom...
Read Full Article • 392 comments

Friday December 4, 2020 9:04 am PST by Hartley Charlton
Apple has filed a patent application for an intense light-absorbant matte black finish for a range of products, including the iPhone, iPad, Apple Watch, and MacBook (via Patently Apple). Image via ColorWare The patent application, filed with the U.S. Patent and Trademark Office, is titled "Anodized Part Having a Matte Black Appearance," and outlines the characteristics of the finish and...
Read Full Article • 282 comments

Tuesday April 13, 2021 1:53 am PDT by Tim Hardwick
A new image posted on Twitter this morning allegedly shows Apple's as-yet unreleased spring color options for iPhone 12 cases, offering a better look at the company's upcoming protective silicone cases. Image via Tommy Boi Based on the images, Apple plans to release four new color options in its iPhone 12 case range. Official names for the colorways are still unknown, but based on the photo...
Read Full Article • 25 comments

Monday April 12, 2021 2:34 am PDT by Tim Hardwick
Apple has in place stringent quality control standards on the assembly line floor to prevent mistakes in production, but that doesn't mean they don't happen. Images shared on Twitter reveal an iPhone 11 Pro with a misaligned Apple logo on the back of the device, a misprint that is said to be as rare as 1 in a million. The images, posted by Internal Archive, clearly show the Apple logo is ...
Read Full Article • 49 comments

Thursday May 20, 2021 1:12 am PDT by Tim Hardwick
Danish audio outfit Bang & Olufsen today announced the Beosound Explore, a rugged, lightweight Bluetooth speaker that's designed for taking on outdoor adventures. Pitched as the first speaker to use a scratch resistant Type 2 anodized aluminum, the can-shaped unit is IP67 dust and waterproof, weighs 631 grams, is portable (81mm x 124mm) and offers up to 27 hours of playtime on a single...
Read Full Article • 54 comments