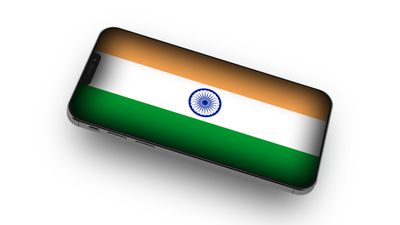 "We are proud to be starting production of iPhone 12 in India for our local customers," Apple told the Indo-Asian News Service in a statement.

"Apple is dedicated to making the best products and services in the world to delight our customers," the company added.

Apple's market share in India increased from 2% to 4% in the quarter that ended in December, based on data collated by research firm Cybermedia.

Apple shipped more than 1.5 million iPhone units in India in the quarter, up 100% year-on-year, making Q4 2020 its best quarter in the country to date.

According to the data, Apple managed to double its market share thanks to improved sales of the iPhone 11, ‌iPhone‌ XR, ‌iPhone 12‌, and the 2020 iPhone SE. Overall, Apple shipped more than 3.2 million ‌‌iPhone‌‌ units in India in 2020, up 60% year-on-year.

The results follow several recent moves by Apple in the country, including the launch of a regional online store in September 2020 and a Diwali promotion in October that offered free AirPods with every ‌‌iPhone 11‌‌ purchase.

Apple has historically struggled to be competitive in what is the world's second largest smartphone market, in part due to the premium price tags of its ‌‌iPhone‌‌ models versus the low cost of rival handsets from the likes of Xiaomi, Oppo, and Vivo that have swamped the market.

However, Apple has taken advantage of the Indian government's Made in India initiative to increase its regional manufacturing base, which has allowed it to save import duty costs and pass on the savings to customers by reducing prices on older generation ‌‌iPhone‌‌ models.

DelayedGratificationGene
1.4b people 5x the size of the US. That’s a HUGE market and Apple is doing all the right things there to capture it.
Score: 7 Votes (Like | Disagree)

Canezmd
Sooo... India put tarriffs on iphones unless they're made in India with Indian labor... so Apple responded by moving production to India.

Do all Apple manufacturing partners use the same equipment? In other words. Is a iPhone made in China assembled using the exact same machines, techniques and materials as one made in India?
Score: 2 Votes (Like | Disagree)

SuperMatt
India has laws that heavily incentivize things sold there to be made there. Apple is doing this to get a foothold in a growing economy. I think it is a great idea for Apple to increase sales there, and also create another base of manufacturing so they aren’t reliant on any one country to produce iPhones. Another win for Tim Cook.
Score: 2 Votes (Like | Disagree)

rradkrishnan
Will there be reduction in price of the iPhone 12?
Score: 1 Votes (Like | Disagree)
Read All Comments

Friday August 6, 2021 2:18 am PDT by Sami Fathi
The first physical Apple retail store in India, promised by Apple CEO Tim Cook last year to open in 2021, has been delayed due to the worldwide health crisis, the company has confirmed to The Indian Express. Last year, during an earnings call, Apple CEO Tim Cook stated that his company plans to open its first official Apple Store in India by 2021. Clearly, due to the unforeseen and...
Read Full Article • 12 comments

iPhone 12 Production Halted in India by Protests Over Food Poisoning

Tuesday December 21, 2021 7:26 am PST by Hartley Charlton
iPhone 12 production in India has been halted by protests over food poisoning at a Foxconn factory, Reuters reports. Foxconn's manufacturing plant near Chennai in southern India, which produces iPhone 12 models, is set to remain shut this week after protests by workers. Protestors reportedly blocked a major highway leading to the plant in response to 150 employees being admitted to hospital...
Read Full Article • 45 comments