Netflix has today announced the launch of its "Fast Laughs" feature, available now in the video streaming service's iOS app (via iPhone in Canada). 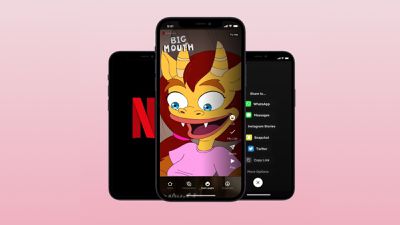 Fast Laughs offer "a full-screen feed of funny clips from our big comedy catalog including films, series and stand-up from comedians like Kevin Hart and Ali Wong," according to Netflix director of product innovation Patrick Flemming. Netflix says that the mobile-only section will provide up to 100 new curated clips per day.

To access the feature, users will find a new "Fast Laughs" tab in the Netflix app. Clips will auto-play and the feed effectively resembles TikTok with vertical scrolling. The view includes a "LOL" button, which releases a burst of "Face with Tears of Joy" emojis when tapped.

Netflix users can customize their Fast Laughs feed by adding series, films, and stand-up specials to their lists. Individual clips from Fast Laughs can also be easily shared via iMessage, WhatsApp, Instagram, Snapchat, Twitter, and more.

Fast Laughs acts as an entry point to begin watching a comedy show immediately, but it also functions as a destination to watch standalone entertaining moments. The Fast Laughs feature is unavailable on Netflix kids' profiles, and users are able to filter displayed content based on their set maturity level.

Fast Laughs is available now for users in English-speaking countries such as the U.S., Canada, UK, Australia, and Ireland. The feature is also expected to come to the Netflix app for Android at some point in the future.

Remember when apps were unique and didn’t resemble each other?

HappyDude20
Remember when apps were unique and didn’t resemble each other?
Score: 6 Votes (Like | Disagree)

TheralSadurns
Portrait Video is a sin and should die.
Score: 3 Votes (Like | Disagree)

Remember when apps were unique and didn’t resemble each other?

Yup, I remember those old days.
Score: 2 Votes (Like | Disagree)

Daniel Poulin
This had come up on my Netflix a month or two ago, I thought it had already been rolled out. Maybe it just got pushed to me as a beta/trial I guess...

I found the clips in isolation to be not very funny, not really clip-worthy. I only checked it out once or twice, and then ignored it. Netflix is great at creating full-length content, evidently not so great at cutting out short funny bits.
Score: 2 Votes (Like | Disagree)

Re-downloaded the app just for this and joyfully killed 10 minutes. Thanks ADD.