Alongside new flagship smartphones, Samsung today announced the launch of its Galaxy SmartTags, item trackers that seem to be similar in design and functionality to Apple's long-rumored AirTags that have yet to launch.


Design wise, the Galaxy SmartTags have a squircle shape with a small cutout at the top that's designed to accommodate a key ring or strap for attaching it to various items. The SmartTags measure in at 1.54 inches x 1.54 inches x 0.39 inches. Apple's ‌AirTags‌ are rumored to be round in shape, but we don't yet know for sure what they'll look like.

The Galaxy SmartTags are Bluetooth-enabled (using Bluetooth LE 5.0) and can connect to a smartphone to relay an item's position. Samsung is not using the more advanced Ultra Wideband technology that allows for more precise positioning information to be relayed, instead relying solely on Bluetooth. It's not entirely clear why Samsung hasn't adopted UWB for the SmartTags, because it is a feature built into newer Samsung smartphones, but Samsung does have plans for a UWB version called SmartTag+ later this year. 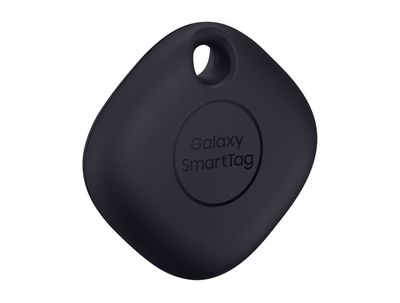 Apple's ‌AirTags‌ will feature Ultra Wideband technology that works with the U1 chip in the iPhone 11 and iPhone 12 models for more accurate tracking and to enable a rumored augmented reality item location function.

SmartTags can be located in Samsung's "SmartThings Find" app, which will show the location of the tag if it is in Bluetooth range, or if it isn't, the last location. There's a ring button that can be tapped to make it easier to locate a close-by item using sound, and a map for finding items that are lost further away.

Samsung has a "Galaxy Find Network" that uses other people's Galaxy devices to locate lost items, which is similar to how ‌AirTags‌ will work. ‌AirTags‌ will be able to be located alongside iOS devices using the Find My app. Apple in iOS 13 added a Find My feature that lets lost devices be tracked even without a cellular connection by leveraging devices owned by other people, and this is also expected to work for the ‌AirTags‌.

With the SmartTags from Samsung, nearby Galaxy devices can scan the tag and then send info on location to the item's owner, with the app also providing a history of the locations where the SmartTag has been spotted for tracking purposes.

The SmartTags will also have smart home capabilities, which is not yet something we've heard rumored for the ‌AirTags‌. SmartTags are able to control Internet of Things devices, allowing for smart home automations that can be activated when a button on the SmartTag is pressed. So, for example, if you have a SmartTag on your keys and arrive home, you can press the button to turn on all the lights inside.

Samsung told The Verge that the SmartTags are only designed to work with Samsung Galaxy devices and are not compatible with other Android phones or iPhones.

Samsung is selling the SmartTags individually or in a two-pack, with a single tag priced at $30. We don't yet have any pricing data on ‌AirTags‌, but it's quite likely that Apple will want pricing to be competitive with other item tracking tags on the market like the SmartTag from Samsung.

SmartTags can be pre-ordered from Samsung as of today and will start shipping out by January 27.

whenever someone says "Samsung doesn't copy Apple", just point them to this and a bunch of other examples in the past.

Technically, it would be Apple and Samsung copying Tile.
Score: 63 Votes (Like | Disagree)

It's not entirely clear why Samsung hasn't adopted UWB for the SmartTags, because it is a feature built into ('https://insights.samsung.com/2020/08/21/what-is-ultra-wideband-and-how-does-it-work/') newer Samsung smartphones, but Samsung does have plans for a UWB version called SmartTag+ later this year.

Sounds to me that these tags, in the hopes of beating Apple to the market, are a rushed product
Score: 29 Votes (Like | Disagree)

farewelwilliams
whenever someone says "Samsung doesn't copy Apple", just point them to this and a bunch of other examples in the past.

xnu
If AirTags are not $50 each, I will be disappointed.
Score: 19 Votes (Like | Disagree)

whenever someone says "Samsung doesn't copy Apple", just point them to this and a bunch of other examples in the past.

Which released Apple product have Samsung copied here? For all we know, Samsung may have started developing these long before Apple, but the bottom line is they beat Apple to market with them.
Score: 19 Votes (Like | Disagree)
Read All Comments