Apple today confirmed that it has chosen to suspend Parler from the App Store, stating that the self-described "non-biased, free speech social media" app has failed to take "adequate measures to address the proliferation" of "threats to people's safety." Apple said there is "no place on our platform for threats of violence and illegal activity," and noted that Parler will remain unavailable on the App Store until if and when these issues are resolved. 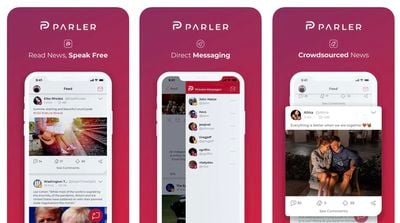 We have always supported diverse points of view being represented on the App Store, but there is no place on our platform for threats of violence and illegal activity. Parler has not taken adequate measures to address the proliferation of these threats to people's safety. We have suspended Parler from the App Store until they resolve these issues.

Apple first sent Parler a letter on Friday morning stating that it had received "numerous complaints regarding objectionable content" within the app, and accusations that the Parler app was "used to plan, coordinate, and facilitate the illegal activities in Washington D.C. on January 6, 2021," referring to the riot at the United States Capitol that resulted in the loss of life, injuries, and the destruction of property.

Apple said Parler "appears to continue to be used to plan and facilitate yet further illegal and dangerous activities," and provided the app with 24 hours notice to submit an update and "moderation improvement plan," or face removal from the App Store. In a subsequent letter sent to Parler, Apple now says that "the processes Parler has put in place to moderate or prevent the spread of dangerous and illegal content have proved insufficient."

According to Apple, Parler said that it has been taking harmful content "very seriously for weeks" and was planning to implement moderation efforts "for the time being," but Apple said a temporary "task force" is "not a sufficient response given the widespread proliferation of harmful content," leading to Parler being suspended today.

To the developers of the Parler app,

Thank you for your response regarding dangerous and harmful content on Parler. We have determined that the measures you describe are inadequate to address the proliferation of dangerous and objectionable content on your app.

Parler has not upheld its commitment to moderate and remove harmful or dangerous content encouraging violence and illegal activity, and is not in compliance with the App Store Review Guidelines.

In your response, you referenced that Parler has been taking this content "very seriously for weeks." However, the processes Parler has put in place to moderate or prevent the spread of dangerous and illegal content have proved insufficient. Specifically, we have continued to find direct threats of violence and calls to incite lawless action in violation of Guideline 1.1 - Safety - Objectionable Content.

Your response also references a moderation plan "for the time being," which does not meet the ongoing requirements in Guideline 1.2 - Safety - User Generated content. While there is no perfect system to prevent all dangerous or hateful user content, apps are required to have robust content moderation plans in place to proactively and effectively address these issues. A temporary "task force" is not a sufficient response given the widespread proliferation of harmful content.

For these reasons, your app will be removed from the App Store until we receive an update that is compliant with the App Store Review Guidelines and you have demonstrated your ability to effectively moderate and filter the dangerous and harmful content on your service.

Parler remains available to users who already installed the app on their device.

Update: Amazon Web Services also plans to suspend Parler's account effective Sunday at 11:59 p.m. Pacific Time, stating that the app "poses a very real risk to public safety" in violation of its terms of service, according to an email obtained by BuzzFeed News. "Amazon's suspension of Parler's account means that unless it can find another host, once the ban takes effect on Sunday Parler will go offline," the report explains.

Friday January 8, 2021 4:36 pm PST by Juli Clover
Apple has given conservative social network Parler 24 hours to implement a full moderation plan and remove objectionable content or face a permanent ban from the App Store, reports BuzzFeed News. In an email sent to Parler this morning, Apple said that it had received complaints that the app had been used by supporters of President Donald Trump to plan and coordinate the infiltration of the...
Read Full Article • 976 comments

Tuesday February 9, 2021 5:40 am PST by Tim Hardwick
The problem of scam iOS apps has dogged Apple's App Store for some years now, but over last two weeks the developer Kosta Eleftheriou has taken to Twitter to highlight that the problem remains as big as ever in at least some app categories – and also offered iOS users a way to spot them. Taking blatant rip-offs of his own popular FlickType Apple Watch keyboard app as an example of how...
Read Full Article • 64 comments

Tuesday January 18, 2022 10:35 am PST by Juli Clover
Verizon and AT&T's upcoming rollout of new C-Band 5G technology could cause chaos and lead to widespread delays of passenger and cargo flights, major U.S. airlines said on Monday in a letter sent to the White House National Economic Council, the FAA, and the FCC (via Reuters). "Unless our major hubs are cleared to fly, the vast majority of the traveling and shipping public will essentially...
Read Full Article • 176 comments