Apple this weekend shut down all of its stores in California, including those in the San Francisco Bay Area, after beginning to shutter stores in Los Angeles on Friday. 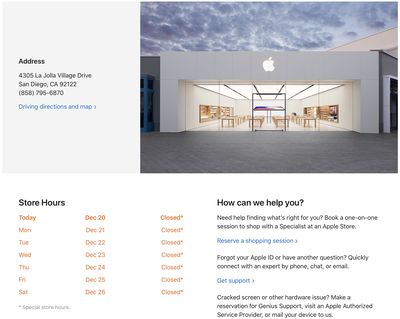 All retail locations in California have a notice letting customers know that the stores are temporarily closed, though some are allowing for order pickups and genius bar appointments through December 22. There's no word on when the stores will reopen, but they will remain closed through the holidays.

Apple has shuttered stores in California as COVID cases in the state have continued to rise, and stores in other places around the world are also closed down right now. According to 9to5Mac, there are nearly 100 Apple Stores that are non-operational at this time.

In most stores that are still open in the United States, Apple is operating in a limited "Express" capacity, allowing for pickups and genius bar appointments but not in-store shopping and browsing.

Apple began closing retail locations earlier this year and many of its stores were shut down for months in the spring. Apple began reopening stores in June, but said that stores could close again depending on local guidelines and conditions. 400 stores are still open.

Maybe they shouldn't have opened in the first place.

There you have it folks. Let’s just shut the world down. Shut it down! We’re closed!
Score: 37 Votes (Like | Disagree)

Pretty much everyone I know are effected by this economically.

0 people I know who are effected by this health wise.

Be glad, I know a lot of people who had or currently have Covid and I have friends who have had friends or relatives die from it.
Score: 36 Votes (Like | Disagree)

There you have it folks. Let’s just shut the world down. Shut it down! We’re closed!

Well if that ****** Trump would have mandated mask and not call this a Hoax, maybe much of this wouldn't have been necessary. However, he doesn't give a damn about anyone but himself. It still cost him the election.
Score: 28 Votes (Like | Disagree)

Attirex
The pandemic has been an IQ test, and America scored about a two.
Score: 23 Votes (Like | Disagree)

JPack
Looks like America rounded the corner and ran straight into a wall.
Score: 17 Votes (Like | Disagree)

Because of masks and lockdowns? Or because of suicide and OD’ing? I agree. Let’s go back to normal.

Life is normal here in Australia. Because of masks and lockdowns in the beginning. Seriously, you Americans are the worst. Too selfish to put on a mask to protect your fellow citizens. You’re still mired in your first wave.
Score: 17 Votes (Like | Disagree)
Read All Comments

Monday December 27, 2021 9:27 am PST by Joe Rossignol
As COVID-19 cases continue to rise, the number of Apple retail stores in the U.S. that are temporarily closed today has surpassed 20. Not all of the closures are related to the virus, with five stores closed in Washington state following inclement weather. The latest high-profile locations to be shut for business include Apple Carnegie Library in Washington, D.C., Apple Century City in Los...
Read Full Article