Microsoft today announced that it is releasing new updates for many of its Microsoft 365 for Mac apps to introduce native support for Apple's M1 MacBook Pro, MacBook Air, and Mac mini. 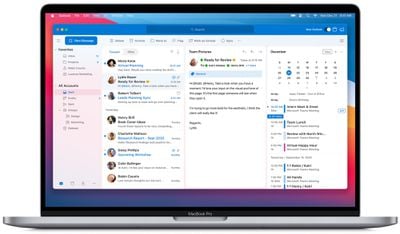 Core Office apps, including Office, Word, Excel, PowerPoint, and OneNote are now able to run faster on ‌M1‌ Macs. Microsoft has used the Universal app binary so the apps will also continue to run as normal on Intel Macs.

According to Microsoft, the updates are going out today, and users can check the Mac App Store, use AutoUpdate in a Microsoft app, or wait for an automatic update.

The updated Outlook for Mac app that's available today now includes support for iCloud accounts, allowing work and personal emails, contacts, and calendars in one app. This will be rolling out to Outlook for Mac users in the coming weeks.

Microsoft says that it is working to bring native ‌M1‌ support to additional apps, including Teams for Mac. Microsoft has also been redesigning some of its Office for Mac apps with an updated Office Start experience for Word, Excel, PowerPoint, and OneNote, and these updates will be available starting next month.

Update: Microsoft has also released a new version of its Visual Studio Code app that's designed for ‌M1‌ Macs. It is available to those who participate in Microsoft's Insider program.

I don’t get why teams is not included in these updates. No native dark mode. No native notifications. Makes no sense.

Probably because Teams is built on the Electron app framework, so it is a completely different development from the rest of the M365 Apps. It is disappointing, especially the native notifications.
Score: 14 Votes (Like | Disagree)

jmh600cbr
I don’t get why teams is not included in these updates. No native dark mode. No native notifications. Makes no sense.
Score: 8 Votes (Like | Disagree)

pakster
I have been running the beta version with arm support for about a week on my new MacBook Air. It runs smooth. Much much better than my work issued Dell laptop.
Score: 6 Votes (Like | Disagree)

*edit* That's one huge screenshot. That should be better.

Jaro65
What a difference: Microsoft now versus under Ballmer. Night and day difference.
Score: 4 Votes (Like | Disagree)
Read All Comments