Apple recently released the HomePod mini, a new $99 version of the original HomePod that's smaller, cuter, and, most importantly, competitively priced. At $99, the ‌HomePod mini‌ can better compete with affordable smart speakers from companies like Google and Amazon.

Subscribe to the MacRumors YouTube channel for more videos.
The ‌HomePod mini‌ has been praised for its high-quality sound at its price point, so we thought we'd compare it to Google's Nest Audio and Amazon's Echo to see how it measures up in terms of sound quality, design, and smarts. In the video and the photos below, the ‌HomePod mini‌ is the white speaker, the Amazon Echo is the black speaker, and the Google Nest Audio is the gray speaker that's taller in size. 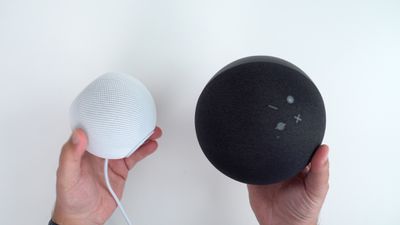 First and foremost, the Nest Audio is priced at $99.99, and the Amazon Echo has an MSRP of $99.99, but it's currently on sale for $70, so all three speakers are available at about the same price points. We may not see the ‌HomePod mini‌ drop in price to Echo level anytime soon given that it was just released, so Amazon has an edge when it comes to pricing.

The Nest and the Echo are larger than the ‌HomePod mini‌, but all three have a similar mesh fabric design. The Nest Audio has a tall, flat design, while the Echo and ‌HomePod mini‌ have a round shape.

The Echo has easy to use physical buttons, while the Nest Audio has capacitive touch controls that aren't exactly intuitive when you're first starting to use it. The ‌HomePod mini‌ has a little touch area at the top that supports touch gestures and lets you know when Siri's been activated.

There is no built-in microphone muting function on the ‌HomePod mini‌, while both the Nest and Echo have mute switches so you can prevent them from listening to conversations if desired. The Echo has a 3.5mm headphone jack that can connect to other devices, something lacking on the ‌HomePod mini‌ and the Nest.

When it comes to power, the ‌HomePod mini‌ is the only one of the bunch that has a USB-C connector and a separate power adapter, which means it theoretically can be run off of a battery pack with a USB-C port.

As for sound quality, there's not as much difference as you might think and all three sound close to the same. At similar volumes, the ‌HomePod mini‌ has a more balanced sound with nothing blown out, but the Echo and the Nest deliver more bass (perhaps a little too much) and can reach higher volumes due to their larger sizes. Audio equipment inside each speaker is listed below.

The Nest Audio and the Amazon Echo win out over the ‌HomePod mini‌ if you're looking for volume because they can better fill a room with sound. You can pair two HomePod minis together to ramp up the volume, but that requires another $99 investment. Even with a much smaller form factor, the ‌HomePod mini‌ isn't too far off from the larger speakers, and the ‌HomePod mini‌'s sound continues to be impressive for such a tiny device.

All of the speakers are considered smart speakers and work with ‌Siri‌ (‌HomePod mini‌), Google Assistant (Nest Audio), and Alexa (Amazon Echo). The speakers can be used to control smart home devices, answer questions, place calls, get news updates, check calendars, and more, so for the most part, regardless of speaker, it's going to do what most people want in a smart speaker.

The ‌HomePod mini‌ is limited to controlling HomeKit-enabled devices and it is not as open or compatible with as many devices as the Amazon Echo or the Google Nest. If you don't have a significant HomeKit setup, the smart home features of the ‌HomePod mini‌ are going to be useless.

Alexa and Google Assistant can do more than ‌Siri‌ and have long been considered to be better at answering queries and completing tasks than ‌Siri‌. Alexa in particular is great for custom home automation workflows, but Apple's ‌Siri‌ is the most privacy-focused of the bunch, which is worth considering. If you just want basic smart functionality, though, any of the three speakers works well.

Amazon's Echo works with almost all music services, including Apple Music and Spotify, while the Nest Audio works with Spotify, YouTube Music, Pandora, and Deezer. The ‌HomePod mini‌ is designed to work with ‌Apple Music‌ primarily, but Apple has implemented support for third-party music services. Spotify does not work natively on the ‌HomePod mini‌ as of yet, but that functionality may be coming, and Amazon Music and iHeartRadio are adding support.

Right now, the ‌HomePod mini‌ works with Pandora as a third-party music app, and other music services need to be AirPlayed to the speaker using an iOS device.

All in all, these speakers are all fairly similar when it comes to sound and performance. Choosing between them mostly comes down to ecosystem preference. If you already have Alexa-enabled devices, the Amazon Echo is a better choice. Similarly, if you use Google Assistant, it makes sense to pick up a Nest Audio. For those in the Apple ecosystem, especially those who use ‌Apple Music‌ and have ‌HomeKit‌ setups, the ‌HomePod mini‌ is an ideal choice.

Which smart speaker do you prefer? Let us know in the comments.

Rocko99991
Just pick the one that collects/sells the least amount of data.
Score: 28 Votes (Like | Disagree)

Apple_Robert
No way would I entertain the thought of Amazon or Google due to privacy concerns. I have been pleased with my new HomePod mini.
Score: 15 Votes (Like | Disagree)

BWhaler
We bought one HomePod mini, and we love it.

Siri kinda sucks, but privacy is paramount, especially in the home.

PJWilkin
Siri is the HomePods biggest let down

until Apple drastically improve it, the HomePod will remain infuriating
Score: 14 Votes (Like | Disagree)

jclo
I like my mini, but I wish Apple had made it wireless and given us an option to use it sans cord. Maybe a wireless charging base so it could be a pick up and bring it wherever situation.
Score: 14 Votes (Like | Disagree)
Read All Comments

Wednesday August 10, 2022 4:34 am PDT by Tim Hardwick
In the latest iOS 16 beta, Apple has updated the status bar battery icon on iPhones with Face ID to display the exact percentage remaining rather than just a visual representation of battery level, and while the change has been largely welcomed, some users are unhappy with the way it has been implemented. In iOS 15 and earlier, battery percent has not been present on iPhones that have...
Read Full Article • 250 comments