Apple's introduction of widgets on the Home Screen in iOS 14 has driven a surge in interest among users looking to customize their iPhone, and that has reportedly had a knock-on effect for Pinterest, whose iOS app has seen record downloads as users flock to its content seeking design inspiration. 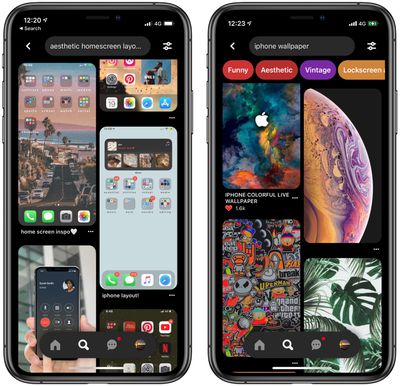 As reported by TechCrunch, App Store intelligence firm Apptopia was first to note the impact of the iOS 14 customization trend on Pinterest. According to its data, Pinterest saw a record high number of daily downloads on September 21, with around 616,000 new installs globally.

Offering similar numbers, market intelligence firm Sensor Tower estimated 680,000 Pinterest installs across iOS and Android the previous day, as users searched for photos to use for custom icons or wallpapers to go with their new ‌widgets‌.

Sensor Tower estimates that Pinterest's downloads record was actually broken on September 20, with around 800,000 installs worldwide, or a 32 percent week-on-week growth from the 607,000 installs it managed on September 13, a few days before iOS 14 was released to the public.

The interest has also caused Pinterest to jump from number 47 on the Top Free ‌iPhone‌ Apps charts in the ‌App Store‌ to number 7 in just two days. The app currently sits at number 1 in the Lifestyle category on ‌iPhone‌, although it has hovered around the number 1 and number 2 position since February 2020.

The report notes that the driving motivation for the growth in Pinterest installations can be seen on Pinterest's home page, which has been showcasing the new iOS 14 customization possibilities available to users.

The Pinterest home page today showcases iPhone design trends as one of its "Daily Inspirations," where the collection "Trending wallpapers and aesthetic homescreen ideas" is currently sitting at the top of the page. Here, users are finding iPhone backgrounds and sharing other custom designs and icon sets for people to use in their own creations.

One possible ‌Home Screen‌ customization that has taken on a life of its own is the ability to create custom icons using Apple's Shortcuts app. The process involves creating a Shortcut to open an app, and then adding an image to that Shortcut on the home screen.

A TechCrunch spokesperson said that Gen Z has been the main reason for the surge in interest, as this group grew 50 percent year over year in June 2020 and they tend to use Pinterest as a resource for design inspiration.

Especially after it took over google image search.
Score: 12 Votes (Like | Disagree)

The only thing I really want is choosing my own dark and light mode wallpapers separately .
Score: 8 Votes (Like | Disagree)

EvilEvil
Imagine what it would be like if Apple had customization years ago...
Score: 6 Votes (Like | Disagree)

...you can’t even view the image you searched for on GOOGLE without downloading this damn app

Yes! I find that sooooooo annoying! And I won't make an account there on principle.
Score: 5 Votes (Like | Disagree)
Read All Comments

Tuesday October 20, 2020 3:58 am PDT by Tim Hardwick
Customizing the home screen has become popular since the release of iOS 14, and many users have been adding custom app icons to their home screen using the Shortcuts app to create unprecedented levels of personalization. The only problem with this method is that it kicks you to and from the Shortcuts app whenever you open an app with a custom icon, which isn't a great way to optimize usage...
Read Full Article • 64 comments

Thursday March 4, 2021 10:31 am PST by Juli Clover
Over on our YouTube channel, MacRumors videographer Dan has a new video up where he shares his Home Screen, wallpaper, and all of his current favorite widgets. Subscribe to the MacRumors YouTube channel for more videos. Check out Dan's video to see his setup, and then comment below and show us your own Home Screens. It's always fun to see other peoples' Home Screens, and with widgets and...
Read Full Article • 92 comments

Monday June 7, 2021 10:59 am PDT by Frank McShan
Apple today announced iPadOS 15, which introduces the ability to place widgets anywhere on the Home Screen and includes an App Library, a feature first introduced in iOS 14. Widgets can be pinned in different sizes on any page of the Home Screen, providing useful information to users at a glance. Widgets on iPad also get a new larger format to make better use of the device's larger screen. ...
Read Full Article • 71 comments

Wednesday May 26, 2021 1:35 am PDT by Tim Hardwick
Apple appears to have quietly given its Shortcuts feature a performance boost in iOS 14.6 and iPadOS 14.6, which launched for iPhone and iPad on Monday. Despite no mention of the feature in the software's release notes, users on Reddit are describing speed improvements when running automations that include multiple actions. For example, one user describes how a 700-action shortcut they...
Read Full Article • 19 comments

Tuesday January 18, 2022 10:35 am PST by Juli Clover
Verizon and AT&T's upcoming rollout of new C-Band 5G technology could cause chaos and lead to widespread delays of passenger and cargo flights, major U.S. airlines said on Monday in a letter sent to the White House National Economic Council, the FAA, and the FCC (via Reuters). "Unless our major hubs are cleared to fly, the vast majority of the traveling and shipping public will essentially...
Read Full Article • 164 comments