The first Apple Watch Series 6 and SE deliveries are expected on Friday, and orders in the United States, UK, and other countries have begun shipping out ahead of tomorrow's delivery date. 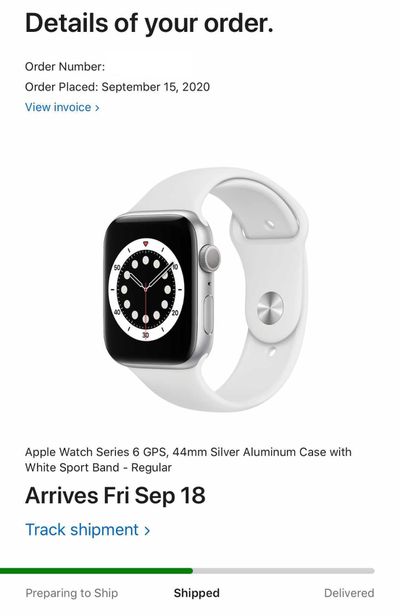 Not all of those who purchased an Apple Watch on Tuesday will be getting their new watches this Friday because many Apple Watch Series 6 combinations featured delivery estimates of September 25 to September 29 from the time that orders kicked off.

In the United States, some of those who have estimates of September 25 to September 29 may get their orders somewhat early, as there are reports on the MacRumors forums from users who are able to track their shipments using reference numbers (typically a phone number or an order number) or advanced tracking features offered by FedEx and UPS.

Apple Stores that are open may have some Apple Watch Series 6 and SE stock available starting tomorrow as tomorrow is the official launch date, but no in-store availability is listed as of right now.

The Apple Watch Series 6 introduces blood oxygen monitoring for the first time, adding new LEDs and infrared light to detect the percentage of oxygen in the blood. Low blood oxygen can be a sign of a medical emergency that needs immediate attention.

There's also a new S6 chip, improvements to the Always-On display, new blue and (PRODUCT)RED aluminum colors, and new Solo Loop and Braided Solo Loop band options that fit over the wrist with stretch and have no clasps. The Series 6 is priced starting at $399.

The ‌Apple Watch SE‌ is Apple's new low-cost Apple Watch. It's identical in design to the Series 6, but it does not have blood oxygen monitoring, it cannot take ECGs, it has a slower S5 chip, and it is available in aluminum only. The SE is priced starting at $279.

All watches still in processing stage :(

Wow, that's nice! Are you getting all three just for yourself? I ordered the color below; Do you guys think it looks good?

Attirex
DEFINITELY need a new watch so I know what time it is when I don't leave the house for another two years.
Score: 5 Votes (Like | Disagree)

Mine would've been end of November so didn't put it in, too long.

Some band combinations push delivery out pretty far. In some cases you’d be better off buying a more common band with the watch, and then buying the band you really want separately.

When I took a look at the space gray with the new green braided loop, it said November. But buying that braided loop band separately would be delivered much faster.

Dublinstiofán
Excitement, fingers crossed for tomorrow! Really missed it since I sold my S4 about a month ago

decypher44
Still sitting at this stage. Ordered pretty soon after the online store opened back up. Unable to find anything on FedEx or UPS by reference. ?‍♂️

XXPP
Still 29 september for me.
Score: 2 Votes (Like | Disagree)
Read All Comments

With Pre-Orders Open in Less Than 24 Hours, There's Still a Lot We Don't Know About the Apple Watch Series 7

Thursday October 7, 2021 8:19 am PDT by Sami Fathi
Pre-orders for the new Apple Watch Series 7 open in less than 24 hours. Despite that, Apple has still not shared basic information that customers would logically need ahead of pre-ordering any product, including information as fundamental as pricing. The Apple Watch Series 7 has been shrouded in a cloud of mystery ever since its announcement at Apple's event last month. At its announcement,...
Read Full Article • 305 comments