Apple today announced a new Fitness+ service which is set to launch later this year. Fitness+ is a fitness experience that was designed with the Apple Watch in mind, and it pairs fitness videos watched on the iPad, iPhone, or Apple TV with Apple Watch fitness measuring metrics. 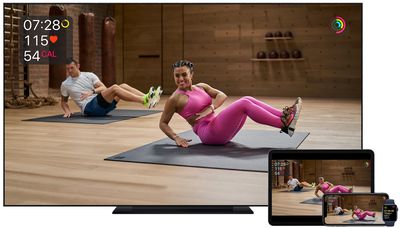 All Apple Customers are eligible for a free one-month trial of Fitness+ when it launches, but those who purchase an Apple Watch Series 3 or later from Apple will get a free three-month trial.

After the free trial, Fitness+ is priced at $9.99 per month or $79.99 per year. Purchasing the yearly plan offers savings of $40, dropping the price to $6.67 per month. Fitness+ is eligible for family sharing, so for the monthly price, up to six family members can access the guided workout options.

When it launches later this year, Fitness+ will be available in the United States, UK, New Zealand, Canada, Australia, and Ireland. Fitness+ requires an Apple Watch Series 3 or later paired with an ‌iPhone‌ 6s/iPhone SE or later.

I mean...doesn't this apply to anything? Why is Udemy better than YouTube? Because you get well built courses with reviews to let you know if it's good, and a curriculum. Why do cooking classes when you have YouTube? Why go to college to learn how to be a joiner (talking UK college here, not US), when you can watch YouTube?

How is Fitness+ better than YouTube? It integrates into the Apple Watch/Fitness ecosystem, which gives you all your stats in relation to the video. The video production quality is guaranteed (which it isn't on YouTube), and it's easily searchable, knowing you won't get ads for products in your search results. You can filter it by your equipment level too, so you know you won't get videos telling you to use equipment X when you don't own it.

You can do fitness stuff on YouTube if you want - just like you can do anything with YouTube videos. But if you want an easier, more integrated experience, then you sign up to specialised services. It's up to you to find where the balance of price vs quality/convince falls for you.
Score: 30 Votes (Like | Disagree)

I think we're seeing the dawn of a new era in virtually-delivered fitness to be honest.
Fitness+ will integrate your wearable. Right now it's for stats, but I think that pretty soon we'll see workouts being adjusted in real time based on actual performance.
Score: 22 Votes (Like | Disagree)

Integration with Apple Watch, ability to customize music and workouts, professional quality — what they are offering is a steal for the price. With minimal or no equipment, you could skip the gym and get a great workout at home (depending on your fitness goals).
Score: 15 Votes (Like | Disagree)

I believe its in integrated with ones AppleWatch and real time display of stats from the watch on screen.
Score: 15 Votes (Like | Disagree)

Peloton is $30/month plus the cost of a very expensive, overpriced treadmill whose only price is justified by the display mounted to it and the associated classes.

Fitness+ is only $9.99 and works with an iPad or any existing TV with tv and also works with dozens of other workouts, not just running — and it's included in Apple One for even less than that (essentially free with other services).

Peloton has a head start by the installed base of treadmill owners but anybody thinking of getting into smart fitness at home will think twice about spending thousands of dollars on this premium treadmill when they can instead use their Apple Watch.

I think we'll see a community build up around Fitness+ as it gets going. You'll be able to challenge your friends and join classes simultaneously.
Score: 12 Votes (Like | Disagree)
Read All Comments

Saturday February 4, 2023 1:30 am PST by Hartley Charlton
Google's Chromium developers are working on an experimental web browser for iOS that would break Apple's browser engine restrictions, The Register reports. The experimental browser, which is being actively pursued by developers, uses Google's Blink engine. Yet if Google attempted to release it on the App Store, it would not pass Apple's App Review process. Apple's App Store rules dictate...
Read Full Article • 204 comments