Apple today announced that it will donate $10 to the National Park Foundation for each purchase made with Apple Pay on Apple.com, through the Apple Store app, or at an Apple Store in the United States from August 24 through August 30. Apple is limiting its donations to the first 100,000 transactions of $10 or more. 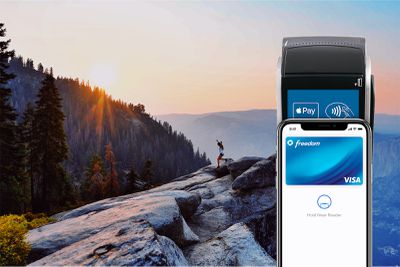 "Our national parks strengthen our connection to nature, to one another, and to the soul of our nation," said Apple CEO Tim Cook. "We're excited to continue building on our four-year partnership with the National Park Foundation, and to support their work to preserve our parks for generations to come."

As noted by Kyle Seth Gray, there will also be a national parks-themed Activity Challenge for Apple Watch users on August 30. Users can earn the award by completing a hike, walk, run, or wheelchair workout of a mile (1.6km) or longer. The workout can be completed from any location, so visiting a national park is not necessary.

On August 30, let’s celebrate the natural wonder of national parks. You can earn this award wherever you are by doing a hike, walk, run, or wheelchair workout of a mile (1.6K) or more. #CloseYourRings #AppleWatch pic.twitter.com/K0sRv1U06O — Kyle Seth Gray (@kylesethgray) August 21, 2020

All national parks across the United States will waive entrance fees on August 25 in celebration of the National Park Service's birthday.

Update: In a press release tied to this announcement, Apple has also indicated that it is making special national parks content available in the Apple TV app, Apple Music, and the App Store.

The Apple TV app will feature a national parks highlight on the Watch Now page, including "Aerial America" from the Smithsonian Channel, along with other relevant shows and movies that explore and celebrate the natural world. In the App Store, customers can check out a collection of its most popular apps for safely exploring the outdoors, including AllTrails: Hike, Bike & Run (AllTrails, Inc.), National Park Trail Guide (Adventure Projects Inc.), PeakVisor (Routes Software SRL), and other guides to parks and trails around the world. And Apple Music will feature its updated Nature Awaits playlist, so even if users can't make it out to the parks, they can hit play and let their imaginations wander.

dguisinger
Or they could just donate $1m..... I hate all of these stupid "do this and we will match" or "do that and we will donate" promotions. They don't make me feel better about a company, stop doing them.
Score: 10 Votes (Like | Disagree)

aforty
A better way of writing the headline would have been: Apple donates $1 million to the National Parks Foundation

Which when you put it that way isn't a lot of money but the PR effect is done for them with headlines like that.
Score: 7 Votes (Like | Disagree)

Why do companies do it this way instead of donating a straight lump sum? Is it for financial, accounting or tax reasons? Is it for PR purposes?

My wife used to work for a charity. She explains that charities actually like this sort of arrangement because in addition to the money they get from the corporate sponsor, it raises awareness and results in more money coming in from other sources, and creates a “long tail” of continuous (but diminishing) donations.
Score: 4 Votes (Like | Disagree)

Posting a press release on their website is Apple “making a fuss about it”? Or is that actually zero fuss?

Sadly, some people can't feel good about themselves unless there's an opportunity to rag on some company or person.
Score: 3 Votes (Like | Disagree)

Apple is quick to declare a strong opinion on racial and gender issues, which are very important. But when Big Sur (which is what the new OS is named after) and Big Based burn to the ground not a peep about donating to wildfire fighters.

It appears you missed the story five days ago where Apple donated money to aid wildfire efforts in California.
Score: 3 Votes (Like | Disagree)

Because it’s cheaper than advertising and surely tax-supporting. Straight up donations are done quietly.