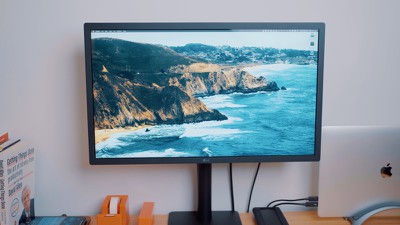 While it is possible that the UltraFine 4K is being discontinued, the fact that the product page remains live on Apple's website suggests that LG may be facing supply issues. The UltraFine 5K also remains unavailable from Apple.

Introduced in May 2019, the UltraFine 4K features a 23.7-inch display with a 3,840 x 2,160 pixels resolution, two Thunderbolt 3 ports, three downstream USB-C ports, up to 500 nits brightness, P3 wide color gamut support, and built-in stereo speakers. The display was priced at $699.95 on Apple's online store in the United States.

The original UltraFine 4K featured a 21.5-inch display with a 4,096 x 2,304 pixels resolution prior to being discontinued last year.

Apple continues to sell its high-end, 32-inch Pro Display XDR with a 6K resolution for $4,999.

Eddy Munn
I would so dearly love a 4k and 5k monitor made by Apple.
Score: 21 Votes (Like | Disagree)

DesertNomad
I won't buy one of these LGs with all the problems associated. I still have a 27" Thunderbolt Display and a 30" Cinema Display on my 15" MPB. I hope to upgrade to a 16" MBP soon but find it really hard to justify a $6K Apple display. We really need an Apple-branded 5K display.
Score: 10 Votes (Like | Disagree)

cmaier
I feel like every couple months we get a “something by LG is in/out of stock” post. No rumors of a reasonably priced display from apple, sadly.
Score: 7 Votes (Like | Disagree)

Thomas2006
Hopefully, when Apple redesigns the iMac they will also introduce matching monitors. A 4k Retina for the smaller iMac and a 5k for the larger iMac.
Score: 5 Votes (Like | Disagree)

MistrSynistr
This thing is so ugly and cheap looking.
Score: 4 Votes (Like | Disagree)

Freida
Whats the point to have 4K and 32" together? Either make it at least 5k or don't bother.

LG is bringing out a new 32" 4k screen at the end of the month, I suspect it's being quietly discontinued...

Tuesday July 27, 2021 3:04 pm PDT by Juli Clover
During today's earnings call for the third fiscal quarter of 2021 (second calendar quarter), Apple CEO Tim Cook was asked how Apple decides what components to purchase and what components to develop, and Cook said that Apple asks if it can be done better. We ask ourselves if we can do something better. If we can deliver a better product. If we can buy something in the market and it's great...
Read Full Article • 92 comments