Apple Donating to Beirut Relief Efforts: 'We Grieve With the People of Lebanon'

In a tweet, Apple CEO Tim Cook today indicated that Apple will be donating to relief organizations that are helping with immediate needs and long-term support in Beirut, following a deadly explosion in the city earlier this week. 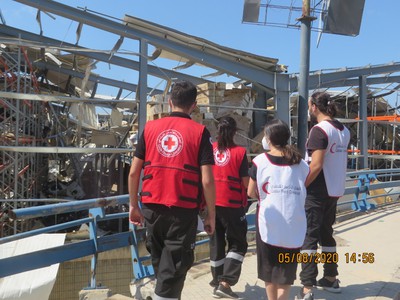 Image Credit: QRCS via Twitter
A reported 2,750 metric tons of ammonium nitrate exploded in Lebanon's capital on the evening of August 4, killing hundreds and injuring thousands.

Apple is donating to relief organizations that are helping with immediate needs and long-term support in Beirut. We grieve with the people of Lebanon, our employees and all those affected by the tragedy. — ‌Tim Cook‌ (@tim_cook) August 7, 2020

No facts they stored these there to bomb israel

In 2013, a Russian-owned vessel, MV Rhosus, was detained in Beirut with a cargo of 2,750 metric tons of ammonium nitrate, which is used in industrial agriculture and mining. The cargo was said to be destined for Mozambique, but the ship stopped in Beirut due to financial difficulties.

Hezbollah are to blame, such a shame the innocent people have to be hurt because of them

No facts they stored these there to bomb israel

Proof or a link.

This is such a disaster, good the world tries to help as much as they can, including Apple.
Let's hope Lebanon will get better after all the misery they had to endure.
Score: 7 Votes (Like | Disagree)

So, because you are from Israel you know the facts, me...shakes head.
Score: 7 Votes (Like | Disagree)

Learn what Hezbollah do and they control that port they done many videos braging about having weapons to bomb israel and we dont know why it went off but its because of them they have all that dangerous chemicals, if you dont wanna beleive me just do your own research

You claim something, you have to provide proof of it, MR rules.

You know as much as anybody, which right now is nothing.

Hezbollah are to blame, such a shame the innocent people have to be hurt because of them

Your statement is in contravention of all known facts. This disaster is the result of gross mismanagement by an ineffective government who had been warned multiple times that storing this in port was an accident waiting to happen. Even if you were to promote the completely unsubstantiated argument that someone actually set this off intentionally what would be their motive? It is not like Lebanon needs any more of a push over the edge.

Speaking of ineffective governments who ignore science-based recommendations resulting in catastrophic and unnecessary loss of life...

I am thankful for anyone who is willing to step in and help in these trying times.
Score: 6 Votes (Like | Disagree)
Read All Comments

Monday June 14, 2021 12:50 pm PDT by Juli Clover
Some M1 iMacs appear to have a manufacturing defect that causes the display to be mounted on the stand in a way that's not perfectly aligned, leading to a crooked display. YouTuber iPhonedo over the weekend published a review of the M1 iMac, and he found that his machine appeared to be tilted on one side, a mounting disparity that was visibly noticeable and proved with a ruler. Another...
Read Full Article • 280 comments