Apple TV+ is considered to be "below average" for both value and original programming when it comes to customer satisfaction, according to new data shared today by the American Customer Satisfaction Index (ACSI).

Apple debuted in the 2019-20 U.S. annual index in 12th position, with a customer satisfaction rating of 74 out of 100, tying both Google Play and HBO. 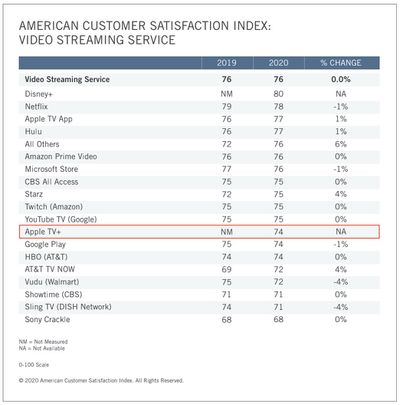 Topping the index was Disney+ with a first-time score of 80 out of 100, which puts the new streaming service ahead of former leader Netflix, with 78 out of 100. Like ‌Apple TV+‌, Disney+ launched in November.

Six months after its November 2019 launch, Disney+ had 54.5 million subscribers worldwide. The service has broad appeal to families with content spanning Walt Disney Studios, Pixar, Marvel, National Geographic, and the Star Wars universe—including the breakout series "The Mandalorian." According to viewers, Disney+ is a standout across much of the customer experience and its original content rates best in class.

Netflix remains the largest streaming service by far, with about 183 million subscribers worldwide. Apple hasn't released subscriber numbers and has a large number of non-paying customers as the company has been providing everyone who has purchased an Apple device since September with a free year of ‌‌Apple TV‌‌+.

Apple is reportedly in the process of purchasing older movies and shows for its TV+ streaming service in a bid to build a back catalog of content, which will put it in a better position to rival the huge libraries available on Netflix, Hulu, and Disney+. As the ASCI report notes, it will be interesting to see if this improves customer satisfaction in the future.

The telecoms report shows that with more and more Americans stuck at home, video streaming overall has seen a boon in customer satisfaction among telecom industries. With a stable ACSI score of 76, video streaming now outpaces subscription TV by a gap of 12 points.

User 6502
Considering it’s free for most it’s a very bad result. When the free offer expires this tank (or the number of subscriptions, or both) will deteriorate further.
Score: 9 Votes (Like | Disagree)

Veinticinco
7th place when most users get it for free, is a damning indictment.
Score: 9 Votes (Like | Disagree)

In 2020 I have watched more stuff on TV+ than Netflix, just finished Defending Jacob. Best so far: Servant.

The thing that’s still missing is one mega-hit like The Mandalorian, but Apple has the resources and the will to make it happen, imo.
Score: 7 Votes (Like | Disagree)

Nicksd84
I think branding is an issue. Ask an average person what Apple TV+ is and they have no idea it even exists let alone has original content.

Do I know how it shoud‘ve been branded and packaged? No... but I don’t get paid to do those things. Lol
Score: 6 Votes (Like | Disagree)

simonmet
At this rate, the number of services will devolve to just offering series individually again.
Score: 6 Votes (Like | Disagree)
Read All Comments