Roughly four months after hitting an all-time high just before financial markets and economies faltered in the face of the current public health crisis, Apple's stock price has returned to those levels and has set a new all-time high today. 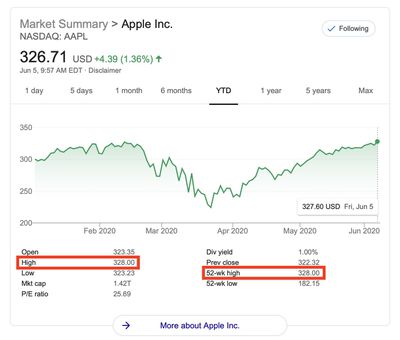 Apple's previous intraday high of $327.85 was set on January 29, and that high-water mark was surpassed just a few minutes ago as it hit $328.00 before pulling back slightly. Apple's share price had fallen as low as $212.61 on March 23 before beginning a fairly steady march back up. The company's all-time closing high is $327.20, set on February 12.

Apple is up over $4.00 today amid broader market gains as U.S. employment numbers for the month of May released today came in with an unexpected increase.

Red Oak
You think the basement dwellers and haters on MR have any investment in AAPL? Me neither

Keep yelling into the wind
Score: 18 Votes (Like | Disagree)

Apple has staggered along since the passing of Steve. Nothing new or innovative has occurred and current OS versions are full of bloat. Apple's product line is terrible right now.

What are you talking about dude, seriously? You guys have to stop with this nonsense.

All Apple has done since Jobs died is add $1T in value and Tim Cook has been the single biggest value creator in the world.

Your anecdotal opinion is utterly meaningless and numbers prove you are dead wrong.

The way some of you completely ignore reality despite hard evidence, numbers, and new highs is baffling to me. You are so wrong but refuse to change your opinion because you’d have to admit it.

AAPL to me isn't a buyable stock. The company is good but there is a history of them outperforming. Which means that people expect it. Which means if they outperform the stock doesn't get a huge bump and if they under perform it tanks. With so many suppliers being in China, and with their products being thought of as a luxury item, I know the company will be fine but I am not convinced that it is a stock to buy. Many stocks have already recovered (for no reason), to me its best to buy those that haven't, which are travel and retail (only the giants like Walmart), especially american companies that are so big that the government won't let fail, or that are involves in military spending like boeing. I would also avoid amazon, the market is excited because they are selling so many good, but they don't make that much money from the sale of goods and generally people buy one item at a time and get free shipping. They make their money from prime when it comes to the retail wing of the company and the more people buy stuff the less prime makes them (due to having to pay for all the free shipping)

Again, what? It’s not buyable today? I mean, I like buying stocks that make new all time highs, particularly before they do so because the business is so good.

A new high in a stock by definition means anyone who doubted Apple before is wrong and at the price they said it is the measure of just how wrong.

You know how many people have used the same tired, generalized, zero substance argument in the past? You’re just riffing...you have no facts to back up your statement. Look at some numbers my man. This is an insane company and there is zero evidence today that will stop them from continuing to win.

Calling a company that trades at a discount to the S&P500 with the quality of Apple not buyable is just more junk analysis.

This company is not overvalued. They make $60B in net income annually. They have the largest buyback in the world and have several businesses growing at double digits.

What logic is there with this AAPL price and remainder of the market? Losing it apart from the Feds pumping liquidity into the system.

Still not moving my money back into tech. not yet. see you in 2021. Hope I'm not wrong.

Liquidated my eTrade in Feb at 54% profit. Bought back in in March and up 65% since then, buying AAPL @ 237, TSLA @ 352, and a host of others. Tech was a historical fire sale in March. Unfortunately, you were wrong.

newyorksole
I’m surprised, but also not surprised. Apple will thrive regardless. Excited to see what they have in store for the rest of the year.
Score: 8 Votes (Like | Disagree)