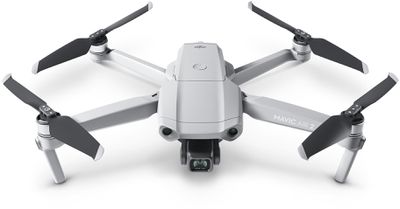 As of today, Apple is selling the Mavic Air 2 in its online store, offering the drone on a standalone basis ($799.95) and in a combo package ($989.95) that also includes a carrying case, two extra batteries, a charging hub, and extra propellers.

It features a 3-axis gimbal, and its new motors, electronic speed controllers, refreshed aerodynamic design, and updated safety features make it easier to fly and increase flight time to up to 34 minutes. The drone can be used with either an iPhone or an Android smartphone, and it offers a long list of notable features, as outlined by DJI:

The Mavic Air 2 can be purchased from Apple as of today and will arrive on May 12th at the earliest. DJI is also accepting orders on its own site for the same bundles.

Note: MacRumors is an affiliate partner with DJI. When you click a link and make a purchase, we may receive a small payment, which helps us keep the site running.

JoeInMilwaukee
Will it deliver itself to your door? :)
Score: 8 Votes (Like | Disagree)

Bryan Bowler
I completely understand casual enthusiasts being turned off by regulations, but as a content producer, drones are invaluable assets for me. I am also a Part 107 operator and thoroughly understand the U.S. National Airspace System and abide by the rules at all times. I love the way technology is marching forward. Filmmakers have tools at their disposal that one could only fantasize about just a few years ago.
Score: 6 Votes (Like | Disagree)

stockcerts
These drones are made in China and there is a bill to have them banned for use by law enforcement. We really need to get our manufacturing out of China!
Score: 6 Votes (Like | Disagree)

cpnotebook80
There was a time when Drones were a thing and everyone one including grandma was flying them..now, alongside mine in the box, with regulations etc... not sure the point unless your a drone enthusiast or biz that needs them.
Score: 5 Votes (Like | Disagree)

There was a time when Drones were a thing and everyone one including grandma was flying them..now, alongside mine in the box, with regulations etc... not sure the point unless your a drone enthusiast or biz that needs them.

Some of the new drones look awesome, Mavic Air 2 included. However with the complexity of the regulation landscape ever changing, I don’t even know where I’d fly it so not interested in a new drone.

The days of the drone flying wild west are over, which is probably for the best, but as a result someone like me who was a moderate enthusiast, not a hardcore one, I’m no longer interested in drones at all.
Score: 5 Votes (Like | Disagree)
Read All Comments