Apple CEO Tim Cook today made a surprise appearance on the BBC's "Big Night In" fundraiser in the UK, where he announced Apple's plans to make a significant donation to the event. 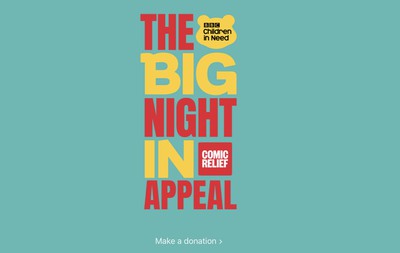 Cook also said that Apple would be waiving royalties on a "Times Like These" single that was performed on the show, and would allow UK Apple users to make Big Night In donations from their devices.

On the UK Apple website, there's now a link to make a donation to the cause, though the link only works on devices set to the UK region. Money raised by The Big Night In will be split between Comic Relief and Children in Need and will support local charities and projects that are providing vital emergency support in the UK.

Apple also recently donated $10 million to the "One World: Together at Home" special in the United States, which was put together by Lady Gaga, the World Health Organization, and Global Citizen.

Apple has also sourced and donated more than 20 million N95 masks to healthcare professionals, and its design, engineering, operations, and packaging teams have created and shipped millions of face shields to medical workers.

SaxPlayer
Good effort by Apple there. Nice one.
Score: 1 Votes (Like | Disagree)

NeverInDoubt
£27m raised with the UK Government also matching it. Thanks to all contributors, whether large or small, much appreciated.
Score: 1 Votes (Like | Disagree)

jaseyy88
How very generous of you Tim Apple
Score: 1 Votes (Like | Disagree)
Read All Comments

Friday June 11, 2021 2:32 pm PDT by Juli Clover
macOS Monterey makes several improvements to password management, positioning iCloud Keychain as an ideal password service to replace third-party services like Lastpass and 1Password. In System Preferences, there's a new "Passwords" section that houses all of your iCloud Keychain logins and passwords so they're easier to get to, edit, and manage. There's a similar Passwords section that's...
Read Full Article • 206 comments

Monday June 14, 2021 12:50 pm PDT by Juli Clover
Some M1 iMacs appear to have a manufacturing defect that causes the display to be mounted on the stand in a way that's not perfectly aligned, leading to a crooked display. YouTuber iPhonedo over the weekend published a review of the M1 iMac, and he found that his machine appeared to be tilted on one side, a mounting disparity that was visibly noticeable and proved with a ruler. Another...
Read Full Article • 195 comments