Given the ongoing situation in the United States and other countries, Apple was not able to hold an official March event to unveil its new iPad Pro, Magic Keyboard, and MacBook Air. 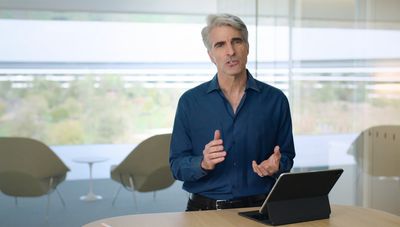 With no event, Apple's software engineering chief Craig Federighi created a little demo video that shows off the capabilities of the new Magic Keyboard and trackpad support on the iPad. The video created by Federighi was shared by The Verge.

In the demo, Federighi walks through the various features available on the trackpad and provides some insight into why Apple added trackpad capabilities.

Our goal with iPad has always been to create a device so capable and so versatile it can become whatever you want it to be. And that versatility is built on the power of touch.

But of course, we give you so many other ways to interact with the iPad, and sometimes you want to type. For typing, nothing beats the Magic Keyboard. It's when typing that you most appreciate the precision and ergo of a trackpad.

In bringing mouse and trackpad support to iPadOS, we deeply considered the way to bring a cursor to a touch-first environment.

The mouse/trackpad cursor is in the shape of a circle on the ‌iPad‌'s display, which Federighi says makes the most sense for the ‌iPad‌ and a touch first experience because it mimics a fingertip. The cursor is not persistent on the display and shows up only when the trackpad or mouse is touched.

As the cursor moves over various elements on the Home screen and in apps, it transforms to highlight what can be selected with a tap.

Federighi says that the trackpad is "amazing" for text, with the cursor transforming into a precise tool for text editing purposes. It's "super easy" to select text, apply formatting, and select whole blocks of text for dragging and dropping.

Accessing Slide Over apps with the trackpad is possible by sliding the cursor to the side of the screen for simple and quick multitasking capabilities.

iPadOS also supports three finger gestures. Swiping up with three fingers accesses the Home screen, swiping left or right with three fingers swaps between open apps, and a swipe up and hold gesture enters the multitasking view. Pinch gestures work for zooming in and out in an app.

Many apps will also be able to take advantage of the cursor. In a spreadsheet app like Numbers, for example, precise selections can be made for easy edits, and resizing cells can be done with pinch gestures.

Federighi's full demo video showing off the new cursor capabilities on the ‌iPad‌ can be watched over on The Verge's site.

We'll be checking out how the Magic Trackpad works with existing iPads in a video coming later this week, so make sure to stay tuned to MacRumors for that.

ipedro
This was Apple’s opportunity to reinvent what a cursor should be in 2020. Rather than an arrow and a little gloved hand, the circle metamorphoses itself into the required shape for the action. It doesn’t just change shape, you can see the little circle becoming a character cursor or a focus selection.

This is why we love Apple. They could’ve just copied the Mac’s long-standing cursor to the iPad but instead reinvented it specifically for a predominant touch device with all the little details that surprise and delight.

abrantes09
Not gonna lie, trackpad support on the iPad is something I never wanted, but never knew I needed. Seems like this thing is bringing loads of functionality to iPadOS. Can't wait to try it out.
Score: 28 Votes (Like | Disagree)

ipedro
I guess we know how the WWDC “Keynote” will be. I wouldn’t be surprised if Apple makes this the new announcement format going forward. It really works.
Score: 12 Votes (Like | Disagree)

kognos
While a few people seem to imply this is a Surface killer, honestly I see this doing nothing but cannibalizing their own products. The lower-end Surface and Surface Go products are pretty stellar and at a good price point, and why would anyone buy a $300 keyboard to go along with a $799 iPad when they could get a Macbook Air? Would it be for touch alone? That seems very odd. Most people have a "computer" and "a portable device" or BOTH, but it's kind of excessive to expect all devices to be all things.

I can't help but feel that Apple wants to go "all in" on touch and is doing this kind of transition on purpose. but they're doing it in an inelegant fashion. Microsoft just happens to design hardware that supports what W10 can do, while Apple can own the ecosystem they're in but doing it in a way that feels like a total cash grab. You want a keyboard for your iPad? Sure, fork over $350 bucks. And people thought the $100 keyboard for the surface was bad...

I'm just saying that Surface can completely die out and it wouldn't really matter. Dell and others are already mimicing the design and that's just great. We have PCs with touch that do very similar to what iPad is attempting to do, and when they have full ARM availability, watch out.

This is terrific, it's really going to provide an extra, outstanding functional improvement to how I use our iPad.
Score: 7 Votes (Like | Disagree)

blairh
Look, this magic keyboard is awesome. No doubt. I'm just so frustrated by Apple.

You are better off buying a laptop and a cheaper iPad.
Score: 7 Votes (Like | Disagree)
Read All Comments