Apple is currently running a new Apple Watch promotion that's ideal for anyone who is considering trading in an older Apple Watch model to purchase a new model. 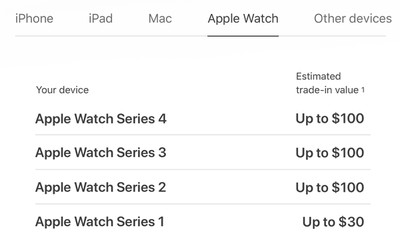 Apple is offering boosted trade-in prices as part of Heart Month, which takes place in February. Apple's Apple Watch page advertises the sale, which drops the price of an entry-level 40mm Series 5 watch to $299.

We tested the purchase process with a new 38mm Apple Watch Series 5 trading in a Series 3. Apple offered $100 for the trade-in, which is provided in the form of a refund to the purchase price after the old Apple Watch is shipped in.

Getting the maximum trade-in value for a Series 2 or Series 3 device requires the Apple Watch to be in good, working condition. Apple also offers $100 back for a Series 4 trade-in or $30 for a Series 1 trade-in.

rocketman80
Apple offering the same amount of money back for Series 4 as they do Series 3 is a kind of eye-raiser to me. Especially considering that apart having more storage, a compass, and an always-on-display, the Series 4 is essentially the Series 5. In terms of SOC and all.
Score: 14 Votes (Like | Disagree)

Anyone else still rocking a series0? Mine is still going strong, though it’s missing many new features due to the lack of updates. Battery has held up well after many years of daily use.

Anyone else still riding a horse and buggy? It rides fine and gets me where I'm going. I'm saving on gasoline, while all you losers rely on big oil.
Score: 12 Votes (Like | Disagree)

Woyzeck
Great news for all those owners of now obsolete gold editions !
Score: 11 Votes (Like | Disagree)

Mick-Mac
Having the same trade-in value for series 2 to 4 is just silly. Looks like Apple are reimbursing by the pound and not by the dollar (winking at the Brits as I type that :-) ).
Score: 9 Votes (Like | Disagree)
Read All Comments

Sunday August 1, 2021 6:21 am PDT by Sami Fathi
Models of the Apple Watch Series 6 with titanium cases part of the "Apple Watch Edition" collection is currently widely unavailable for pick-up in several of Apple's retail stores in the United States and is unavailable entirely for delivery in major markets. Noted by Bloomberg's Mark Gurman in the latest edition of his "Power On" newsletter, titanium models of the Apple Watch Series 6,...
Read Full Article • 102 comments