AT&T today announced that it has launched its 5G network in its first ten markets: Birmingham, Indianapolis, Los Angeles, Milwaukee, Pittsburgh, Providence, Rochester, San Diego, San Francisco, and San Jose. AT&T has PDF maps of coverage areas within these cities in its press release, and the carrier is aiming for nationwide 5G coverage in the first half of next year. 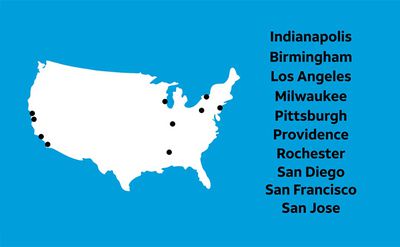 For the time being, customers with the new Samsung Galaxy Note10+ 5G will be able to access AT&T's 5G network, with more devices coming in the future. Apple is expected to launch its first 5G iPhones next year, likely in its usual September timeframe.

The 5G network AT&T is launching today is for the sub-6GHz spectrum, which offers broad coverage at speeds that are a step up from LTE. A separate flavor of 5G operates on the mmWave spectrum and offers even faster speeds but with shorter range, and is thus best suited for very dense, highly trafficked areas. AT&T refers to its mmWave 5G service as 5G+, and it launched in pockets of 12 markets almost exactly a year ago.

Noted analyst Ming-Chi Kuo believes there will be four flagship 2020 iPhones next September, with all of them capable of supporting both sub-6Hz and mmWave 5G technology in select markets such the United States, Canada, Japan, South Korea, and the United Kingdom. Other countries will see only sub-6Hz support, while 5G may be disabled entirely in other countries where 5G isn't widely available, in order to reduce Apple's costs.

AT&T was of course notorious for branding some of its enhanced 4G LTE network as "5G Evolution" or "5GE," which began appearing in the iPhone status bar with iOS 12.2, confusing some users who thought they were able to access true 5G networks.

farewelwilliams
Now AT&T is going to spend millions trying to educate the public the difference between 5G and 5GE
Score: 13 Votes (Like | Disagree)

now i see it
So there's a 5G transmitter or two in these cities that can only be reached within 1000 feet line of sight
Score: 10 Votes (Like | Disagree)

But my iPhone 11 doesn't have 5G anyway so what does it matter? Oh wait.... AT&T is telling me I have 5GE.... they need to get their asses sued off the planet for that but stupid judges will let those lawsuits fall off into the abyss.
Score: 10 Votes (Like | Disagree)

Kabeyun
Not to be finicky, but where on Earth does that map think Providence is??
Score: 9 Votes (Like | Disagree)

BWhaler
Seems like att is way behind their competitors.

makes me also wonder and much capacity even the launch cities are going to have....
Score: 7 Votes (Like | Disagree)
Read All Comments