MacRumors Giveaway: Win a USB-C Stand and Hub for Mac Mini From Satechi

For this week's giveaway, we've teamed up Satechi to offer MacRumors readers a chance to win one of the company's brand new Type-C Aluminum Stand and Hubs, designed for the latest Mac mini models. 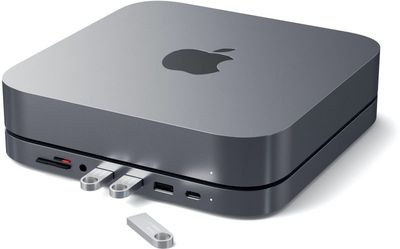 As with all of Satechi's Mac accessories, the Type-C Aluminum Stand and Hub is made from an aluminum that's designed to match the finish of Apple products, in this case, the ‌Mac mini‌. The ports are designed to be at the front of the ‌Mac mini‌, making them easily accessible.

There are built-in air vents that are designed to help regulate temperature and encourage airflow, as the Stand and Hub sits right under the ‌Mac mini‌. The stand is thin and it fits in well with the ‌Mac mini‌'s design, looking more like an additional component than an accessory.

We have five of Satechi's Type-C Aluminum Stand and Hubs to give away to MacRumors readers. To enter to win our ‌giveaway‌, use the Gleam.io widget below and enter an email address. Email addresses will be used solely for contact purposes to reach the winners and send the prizes. You can earn additional entries by subscribing to our weekly newsletter, subscribing to our YouTube channel, following us on Twitter, following us on Instagram, or visiting the MacRumors Facebook page.

Due to the complexities of international laws regarding giveaways, only U.S. residents who are 18 years or older and Canadian residents (excluding Quebec) who have reached the age of majority in their province or territory are eligible to enter. To offer feedback or get more information on the giveaway restrictions, please refer to our Site Feedback section, as that is where discussion of the rules will be redirected.

lowkey
Would be great if it had space for an SSD drive so it could act as storage expansion too.
Score: 8 Votes (Like | Disagree)

Is there same, but with power supply and some good GPU inside?

Unfortunately, I don't have a photo handy, but I have my Blackmagic eGPU sitting on top of my mini, and now have lots of ports and a good GPU. I think the Blackmagic helps cool the mini just slightly too, as it draws air across the case and up and out.

I love it, it keeps my desk looking neat. And, running my i7 6-core mini most of the time with Turbo Boost disabled (and given the Blackmagic is nearly silent), I hardly ever even hear anything from the 'tower of power.' If I really push the CPUs, then I can hear it a bit, but less annoying (by far, IMO) than a MBP (or probably iMac, from what I've read). If I am trying to meet some deadline, I suppose I could re-enable Turbo Boost, but I mostly just leave it off.

(Note: with Turbo Boost on, the fans spin up way too easy. With it off, like mentioned, you can do quite a bit of stuff before you ever hear the fans.)
Score: 1 Votes (Like | Disagree)

What’s the point of this thing, anyways? The Mac Mini already has 4 -C and 2-A ports. What else do you need?

It's pretty easy to run out of ports, six isn't really a lot, esp. if you're not using the HDMI for a display, leaving five.
Score: 1 Votes (Like | Disagree)

You haven't ran into any issues with this?

Also, what is the best method to turn off Turbo Boost? I have read this program will do it for you easily: http://tbswitcher.rugarciap.com

Yes, that's the utility I use.

And, no, I don't think so. I've had the machine freeze up maybe twice in the last year or so, overnight while the screen was locked (running that screen saver with all the Apple logos), but I thought maybe it had something to do with that, so I went back to a simple Apple one... so far, so good. I suppose it could also be due to turning TB off, but I doubt it. (That said, one or two freeze-ups per year isn't that crazy given the last decade of macOS... so I also might just chalk it up to bugs. And, there was some indication it might have been OS issues with the BridgeOS crashing, though Apple never mentioned the mini... but maybe?)

The thing is, I'm super-picky about a quiet machine. The laptops just get too noisy. I've heard the newer iMacs are too (I had a quad-core one from late-2012 that was pretty quiet too.) The one thing I was disappointed about when I got the mini, was how noisy it was in comparison to my nearly silent eGPU. It seemed, doing even small things would sent the fans ramping up. The only other quiet machines were the iMac Pro or the 2013 Mac Pro, so I went with the mini.

I read somewhere to try turning Turbo Boost off, and that did the trick. It is a small peak performance hit, but with the six cores, I don't notice any difference aside from outcomes if I timed something intensive. I'd rather have quiet than 5-10% more performance, or whatever that amount is.

I often run Folding@home at about 35-40% CPU in the background, and don't hear it. I don't hear it for most anything I do either, except for encoding video... but even then it isn't much now that I've learned to encode to HEVC/h.265, as that mostly uses the T2 chip (and is *blazing* fast by comparison too!). I anticipate once I get back to 3D rendering, I'll have to put up with the noise, but probably only when doing a rendering job.

For everything else, it is quiet which is appreciated especially when doing audio recording with a condenser mic! With the eGPU, I just can't see any other Mac that I'd rather have aside from maybe an iMac Pro (but then the screen is fixed and single-use), or the upcoming Mac Pro. Both of those are a bit out of my budget at the moment.
Score: 1 Votes (Like | Disagree)

KAMIKAZEUA
Is there same, but with power supply and some good GPU inside?
Score: 1 Votes (Like | Disagree)

ayale99
To ensure that I win this contest, I went ahead and bought one. Looking forward to my email confirmation.
Score: 1 Votes (Like | Disagree)
Read All Comments