Apple refreshes the Apple Watch every year, and for the latest Series 5 models that were released in September, not many third-party retailers are offering discounts.

For older Apple Watch models, though, there are some significant deals that can be had if you don't mind missing out on the always-on display and the new compass app. Multiple retailers have deals on the Series 4 (now discontinued) and Apple's super cheap Series 3, which is still being manufactured. 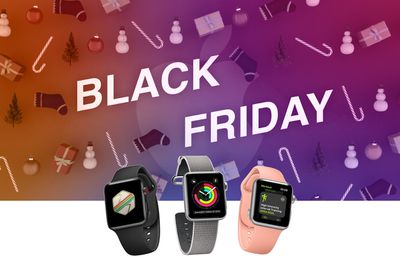 Walmart has the absolute lowest price on the Apple Watch Series 3, offering the 38mm model for $129, a $70 discount off of the standard $200 price tag. The 44mm model will be available for $159, down from the regular price of $229. However, stock already appears to be selling out at most Walmart stores.

Best Buy is offering some small $10 discounts on the Apple Watch Series 3, but these aren't worth picking up if you can get one of the other, better deals.

Some stainless steel models are discounted by $300, dropping the price to $400 from $700, but these deals are not online and will need to be located in retail stores.

Amazon is offering $20 off Apple Watch Series 5 (40mm and 44mm), with an additional $24 saved at checkout, providing the best overall sale on the newest Apple Watch models today.

Sprint does have some discounts on the new Apple Watch Series 5, if you're shopping for a cellular watch that you can add onto an existing smartphone plan. You can get 50 percent off any Apple Watch in this sale, Series 5 included. The discount will be delivered via monthly credits on a 24 month billing agreement, and you'll need one active handset already on the Sprint account.

Make sure to check out our full Black Friday Roundup to find great deals on all of the best Apple products, accessories, and much more before the shopping event ends.

picaman
I purchased the $129 Apple Watch in the WalMart app on Wednesday at 10pm and got an order number. Now I get an email saying they can’t fulfill it and have cancelled my order. You can bet my nearest WalMart store is going to get my full wrath.
Score: 2 Votes (Like | Disagree)

I purchased the $129 Apple Watch in the WalMart app on Wednesday at 10pm and got an order number. Now I get an email saying they can’t fulfill it and have cancelled my order. You can bet my nearest WalMart store is going to get my full wrath.

My guess is that with a well advertised deal across the internet of $70 off an Apple Watch, the resellers were their with their bot army to buy ALL the orders exactly at when they went on sale at 10p to the millisecond.

Wal Mart might have only offered ten watches at the price anyway.
Still sucks you couldn’t get yours. :(
Score: 1 Votes (Like | Disagree)
Read All Comments