Microsoft has revealed its plans to bring a new design to its Outlook for Mac app along with several performance improvements (via The Verge). 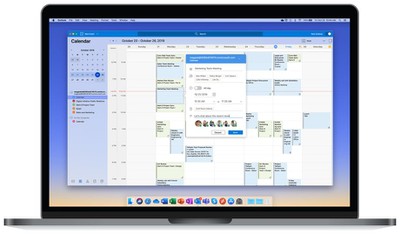 Account syncing optimizations are promised as Outlook will adopt the same cloud sync technology that's used in Outlook for iOS and Android, which should mean Office 365, Outlook.com, and Google accounts sync faster.

Design-wise, users can expect a bundle of new features they may already be familiar with from using the web and mobile versions of Outlook. They include single line email views, a new mail compose interface, the ability to ignore emails, and collapsible panels in the main view.

Regular users will also notice that the ribbon has gone from Outlook for Mac. Microsoft explained its removal to The Verge in the following terms:

"Following the same design principles as the Office 365 user experience updates announced last year, the ribbon was updated in the new Outlook for Mac to be fully customizable. In Mac environment, we refer to it as a toolbar – at this time, there are no plans to announce updates to the ribbon elsewhere on Office for Mac."

Meanwhile, Microsoft is integrating Microsoft Search into the Outlook search bar, which will now live at the top of the Outlook window and hopefully provide quicker and more relevant results. There's also a new My Day view being added to the calendar in the main mail screen.

The new-look Outlook for Mac is available this week to beta testers in signed up to the Insider Fast builds. Simply toggle the "New Outlook" in the top right-hand corner of the app window. Microsoft says it has more updates in the works that should arrive over the coming months.

airwalk331
I use outlook for work and let me say- it is garbage. Searching for emails with words and phrases that are in the email doesn’t show those emails. It also unexpectedly quits all the time on me. I’ve upgraded each time it says there’s an upgrade available but nothing seems to change.


I mean, there’s no excuse for how bad the search function is. “Search” has been around almost since the beginning of the internet.
Score: 5 Votes (Like | Disagree)

thebitguru
Has anyone on Insider Fast ring actually gotten this release yet? If so, what's the version number? I am currently on 16.32 that was installed this morning, but I don't see any option to turn this new view on.

Regular users will also notice that the ribbon has gone from Outlook for Mac.

Outlook for Mac isn’t even that old, but it has been utterly terrible since day one and is unacceptably broken. Poor performance, regular crashes, broken search, feature incomplete. It’s a disaster. The ribbon is the least of its problems!
Score: 3 Votes (Like | Disagree)

jmkinny
Yeah, but will support Apple iCloud calendar (CalDAV) and contact (CardDAV) synchronization? If it doesn't, it's totally useless.
Score: 2 Votes (Like | Disagree)

The current Outlook for Mac is ok, but a more streamlined UI is the correct approach. Faster synchronisation is also required so it's so s-l-o-w.

The Outlook iOS app is a bloated atrocity, so they need to completely start again with the app.

I find outlook for iOS the only app that is not bloated. The Mac version on the other hand is a mess with a confusing interface and so many missing features.

glad to see the departure of the ribbon. Let’s hope they remove it from all office apps.
Score: 2 Votes (Like | Disagree)
Read All Comments

Friday July 10, 2020 11:12 am PDT by Juli Clover
Apple this month published a support document that warns customers against closing their Mac notebooks with a cover over the camera as it can lead to display damage. Image via Reddit Apple says that the clearance between the display and the keyboard is designed to very tight tolerances, which can be problematic. Covering the camera can also cause issues with automatic brightness and True Tone....
Read Full Article • 345 comments

Monday July 13, 2020 6:50 am PDT by Joe Rossignol
Earlier this year, Apple agreed to settle a U.S. class action lawsuit that accused the company of "secretly throttling" older iPhone models. Now, eligible iPhone owners are beginning to be notified about their legal rights and options. Under the proposed settlement, Apple will provide a cash payment of approximately $25 to each eligible iPhone owner who submits a claim, with its total payout ...
Read Full Article • 128 comments

Friday July 10, 2020 7:24 am PDT by Eric Slivka
Apple and Foxconn have reached a key milestone in the development of Apple's long-rumored augmented reality headset, with the semitransparent lenses for the device moving from prototype to trial production, reports The Information. Apple is developing the lenses on a single production line at a Foxconn factory in Chengdu in southwestern China, where most of Apple’s iPad production is...
Read Full Article • 88 comments

Monday July 13, 2020 4:22 am PDT by Tim Hardwick
MySmartPrice has spotted certifications for three new Apple batteries that it believes could be for the upcoming iPhone 12 lineup, despite them being less capacitive than the batteries in the current iPhone 11 series. The batteries are identified with the model numbers A2471, A2431, and A2466, and appear on Safety Korea, China's 3C, and the Danish agency UL Demko. Apple is expected to...
Read Full Article • 133 comments