Following user concern over Apple using Chinese company Tencent as one of its Safe Browsing partners for Safari, Apple has issued a statement assuring customers that website URLs are not shared with its safe browsing partners.

For those unfamiliar with the feature, Safari sends data to Google Safe Browsing to cross reference URLs against a blacklist to protect users against scams and malicious sites. It recently came to light that Apple is also using Tencent for this purpose, and there was concern that data from users outside of China was being sent to Tencent. 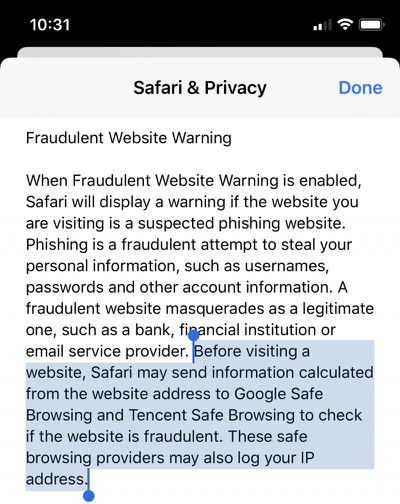 According to Apple's statement, that is not the case, and Tencent is used for devices that have their region code set to mainland China. Users in the United States, the UK, and other countries do not have their website browsing checked against Tencent's safe list.

Apple protects user privacy and safeguards your data with Safari Fraudulent Website Warning, a security feature that flags websites known to be malicious in nature. When the feature is enabled, Safari checks the website URL against lists of known websites and displays a warning if the URL the user is visiting is suspected of fraudulent conduct like phishing.

To accomplish this task, Safari receives a list of websites known to be malicious from Google, and for devices with their region code set to mainland China, it receives a list from Tencent. The actual URL of a website you visit is never shared with a safe browsing provider and the feature can be turned off.

Safari occasionally receives a list of hash prefixes of URLs known to be malicious from Google or Tencent, choosing between them based on the device's region setting (Tencent for China, Google for other countries). Hash prefixes are the same across multiple URLs, which means the hash prefix received by Safari does not uniquely identify a URL.

When Safari receives the list of URLs, it checks the original suspicious URL against the list, and if there is a match, Safari shows the warning pop up suggesting users stay away from the site. The check happens on the user's device, and the URL itself is not shared with the safe browsing provider, but because Safari communicates directly with the safe browsing provider, the providers do receive device IP addresses.

Information about Apple's safe browsing partners can be found in the About Safari and Privacy screen, available in the Privacy and Security section of the Safari portion of the Settings app. Fraudulent website protection is enabled by default, and those still concerned about the safety check feature can turn it off by deselecting the "Fraudulent Website Warning" toggle.

thadoggfather
Apple PR has been working long hours this past week
Score: 27 Votes (Like | Disagree)

A Chinese company is your "safe" browsing partner ... what are you smoking Apple.

Looks like i8t's slowly the time to depart from Safari.

If they continue hugging this much with China, looks like it will soon be the time to depart from Apple as well.

I mean, seriously, what the heck, Apple???

How is it "hugging with China" if literally the only people that (voluntarily) deal with the Chinese provider are... people in China? Also, you can turn it off, so this isn't a Safari thing either.

I swear people either don't read or just choose to take out of it what they want lol. This is absolutely a non-issue, but people are seeing trigger words and running with it.
Score: 19 Votes (Like | Disagree)

calzon65
A Chinese company is your "safe" browsing partner ... what are you smoking Apple.
Score: 18 Votes (Like | Disagree)

Apple is digging its own grave with all of the recent pro-China (aka pro-CCP) narrative.

First, it was Apple's direct anti-democracy stance against HK and now this. Shame on them. I'm very glad to not have upgraded my iPhone in almost 3 years.

Given that Google is blocked in China, what would you suggest they do in this instance?
Score: 17 Votes (Like | Disagree)

thisisnotmyname
so everyone freaked out about privacy when in reality the list is cached and evaluated locally for both China and the rest of the world and only those that match a list of known problem sites are sent for further evaluation. OK.
Score: 16 Votes (Like | Disagree)
Read All Comments