The new version of the dock features built-in cable storage at the bottom of the accessory, so you can make sure you always have a USB-C to USB-C cable with you when you need it while on the go. 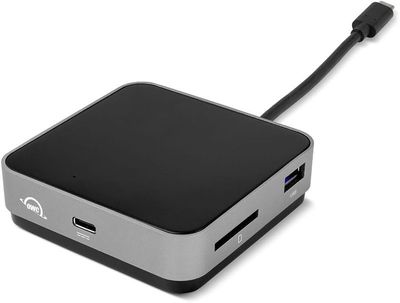 It also supports up to 100W of pass-through power for the first time, up from the 60W supported in the previous version. That means it has enough power for all of Apple's MacBook models, including the 85W 15-inch MacBook Pro.

OWC says the dock is compatible with Mac, Windows, Linux, iOS, Android, Windows, and Chrome notebooks and tablets, and for Apple users, it will work with Mac devices and the USB-C iPad Pro.

The OWC USB-C Travel Dock is available from the OWC website for $54.99.

Sure, it's obsolete and shouldn't be considered. Like USB-A, right? Why should any manufacturer care about costing its customers hundreds of dollars in new adapters? I don't disagree that Apple doesn't care...but they should, because this is an issue that has caused plenty of people to lengthen their hardware replacement cycles.

Why should Apple care? Why should any PC OEM care? In reality, they shouldn’t.

There are solutions and they don’t cost hundreds of dollars. I have zero use for a USB-C to VGA cable, so it’s not costing me any additional money for something I don’t use. I did need some new cables for my devices and it cost me about $50 in new USB-C to Type-**** USB cable to replace the old ones. Done and done.

USB-A is not considered legacy at this point and Apple offers adapters for those who have captive cables that cannot be switched out with a USB-C equivalent. I have a couple for those items that are stuck at USB-A and I have an adapter for them. Otherwise, it’s time for new cables, simple as that. Why this is made out to be some huge imposition on customers is beyond me. Technology changes, by its very nature. Occasionally, changes are more abrupt than others. You adapt and change with it or you don’t and you stay stuck in whatever time period you dig in your heels.

This is not a new phenomenon, when USB was released, companies had to create solutions for serial and parallel connections, first adapters and then cables became the primary way to connect to an older device. They survived for a period of time and eventually, both connectors mostly died out. Sure, there are edge cases, but this is true of technology all the way around. Very little survives the march forward. Listing all the obsolete ports that are no longer in use since the 1970s would take quite a while.

Things don’t move forward if companies don’t force change, it’s that simple. Honestly, should any one of us with zero use for VGA be held back by still having to have that port on a modern computer. The answer is no. It takes up space for something more advanced and more versatile. The same goes for USB-A...it’s still used fairly widely, but even now the tide is turning with more and more devices either have moved to a USB-C port or are offering both cables for users. Eventually, the momentum will shift and USB-A will fade into the sunset. It’s inevitable.
Score: 4 Votes (Like | Disagree)

I have a device that comes with 2 USB-A Ports, an SD Card Clot, HDMI, 2 mini-display ports, and full power pass-through. It's called a Mid-2015 MacBook Pro.

Honestly though, the lack of any VGA connectivity is a problem. Too many presentation venues still have VGA connectors for their projectors, so just having HDMI for video simply isn't enough.

Considering that Apple hasn’t had a standard-sized VGA (D-Sub) connector directly on a portable computer since the PowerBook G4 (Gigabit Ethernet), I would think that anyone one needing to regularly interface with VGA peripherals would be an expert in solving the issue regardless of the Mac model by now, right? It’s been 17 years since Apple last sold that PowerBook G4.

Whether or not VGA is still widely used is irrelevant at this point. It’s horribly obsolete, yet it clings on well past it’s expiration date. It had a very long life and did it’s duty, but let’s not pretend that it’s continued use is a problem for Apple or, for that matter, any other PC OEM.
Score: 4 Votes (Like | Disagree)

macduke
USB-C isn’t proprietary to the Mac. The days of these Mac accessory companies overcharging for inferior products is drawing to a close. There are many better options on the market that provide more ports for less money and still have attractive bead-blasted aluminum enclosures and good reviews.
Score: 1 Votes (Like | Disagree)
Read All Comments

Friday May 27, 2022 2:15 pm PDT by Juli Clover
There's just over a week to go until the 2022 Worldwide Developers Conference, which is one of the biggest Apple events of the year. We've heard surprisingly little about iOS 16 this year, so we're in for some major surprises when June 6 rolls around. As we wait for the keynote event, we thought we'd share some iOS 16 wishlist items from MacRumors readers, because who knows? We just might...
Read Full Article • 248 comments