Thursday June 20, 2019 3:05 pm PDT by Juli Clover
AT&T is the fastest mobile network in the United States according to PCMag's latest annual mobile network comparison, which was released this morning.

For the test, PCMag employees drove through 30 cities and 25 states across the U.S. and ran more than 60,000 mobile speed tests to determine the speediest mobile network. The tests were conducted using Samsung Galaxy S10 devices on networks from AT&T, Verizon, T-Mobile, and Sprint.

This year, AT&T edged out Verizon, the winner for the past five years, thanks to AT&T's focus on improving its LTE network in preparation for 5G technology. While all four networks improved overall on both speed and reliability compared to last year, AT&T improved a bit more than the others. 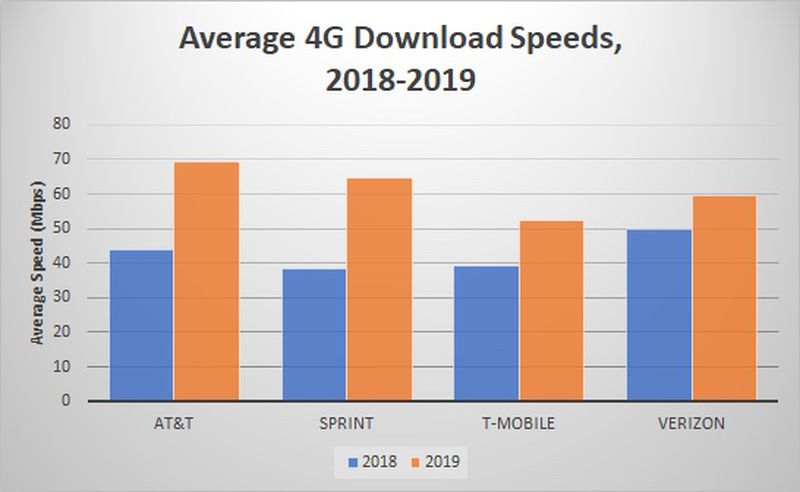 AT&T won or tied for first place in 15 of the 30 cities tested, and it tied or came out on top in all rural regions. AT&T was on top overall in the northwest, southwest, north central, and northeast, while Verizon won in the south central region and T-Mobile came out ahead in the southeast. 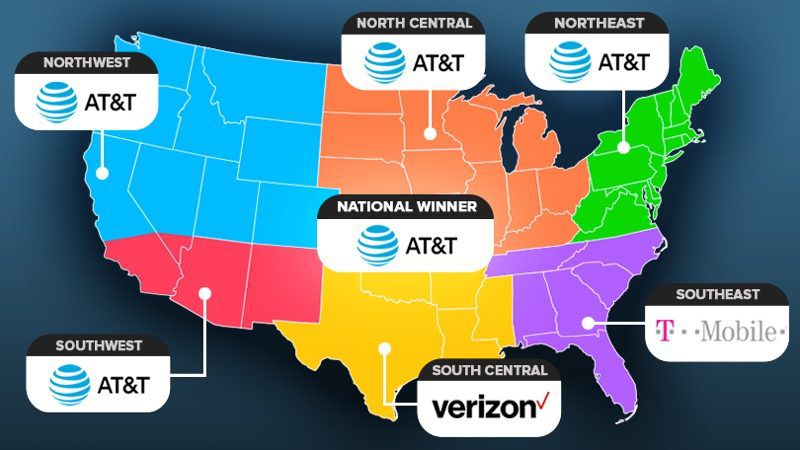 AT&T has been making improvements to its 4G network and has been labeling those 4G enhancements as "5GE," but really it's the same 4G LTE technology offered by other wireless companies as well. Still, these efforts to improve the 4G network ahead of 5G have led to overall speed boosts for AT&T customers.

The full results of PCMag's 2019 mobile carrier speed testing can be found over on the PCMag website.

Unity451
Too bad their Customer Service is awful.
Rating: 15 Votes

BootsWalking
When AT&T is fast, it's fast. But when you're in a bad reception or congested area, no matter if it's in the middle of a big city, then you'll be cursing your iPhone like it was the 3G. I've called them countless times to see when they plan new towers in the areas I have trouble and they never have an answer for me.
Rating: 13 Votes

macduke
I mean, T-Mobile is more than capable when you consider the price, and it doesn't even throttle you until you get to 50GB. The difference isn't that big, especially on a phone. They're all so fast now that I consider price, data caps and coverage to be more important.
Rating: 13 Votes

genegraygsm
Very interesting. I would disagree a little bit with this map. SoCal's AT&T service is horrible. When I was in west TX, AT&T was king and had better service. I have a feeling this is based on the major cities skewing the number. Although, everywhere I've gone I always had a Verizon Signal. Maybe AT&T is finally figuring out their over congestion. We will see what happens with the new 5G network continues to roll out and measure those download speeds. :)
Rating: 9 Votes

WannaGoMac
Where I am AT&T is the CRAPPIEST cell network...
Rating: 8 Votes

munpip214
Ha. Average 4G download speeds of 50Mbps+. I don't think I've ever seen higher than 30... Maybe they drove around at night right next to towers...
Rating: 5 Votes

biglipps66
Having both AT&T and Verizon phones, Verizon is hands down insanely more reliable and faster in Los Angeles and the surrounding areas.
Rating: 5 Votes

Too bad their Customer Service is awful.

I’ve had AT&T since the Cingular Wireless ('https://en.m.wikipedia.org/wiki/Cingular_Wireless') days and CS has gradually improved from god-awful to very good in the last three encounters. They truly seem to want to make you happy. Competition? I don’t know.
Rating: 4 Votes