Dropbox on Tuesday announced a new client for Mac and Windows that seeks to make the cloud storage service a "meta-platform" for collaborative tools in the productivity workspace. 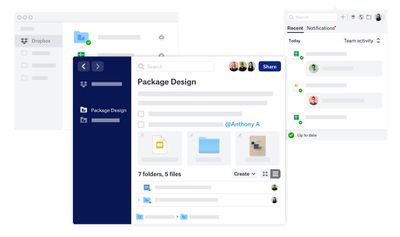 Called "the new Dropbox," the client aims to let teams create and collaborate without ever leaving the app, by enabling them to create and edit Google and Microsoft-based documents, spreadsheets and slides, start Slack conversations and initiate Zoom conference meetings.

The broad idea is to let users engage in light project management outside of the dedicated tools it supports, with the ability to create to-do lists, add comments, delegate tasks, and keep track of progress through a team activity feed.

Other highlights include the ability to create and store shortcuts to any website alongside your content in Dropbox, the ability to manage Jira and Trello projects, and a unified search bar to find traditional files, cloud content, shortcuts, and files you’ve chosen not to download through the company's selective sync feature.

Interested users can opt into an "early access" program to test out the new app before its official launch. Happily though, the company also promised that the standard Dropbox way of doing things – keeping a synced folder on your Mac and using a simple menu bar applet to manage it – won't be going away when the new app officially rolls out.

profets
The last thing that kept me using Dropbox over iCloud Drive completely was the ability to share folders. Now that it’s coming to iCloud in the fall, I’m done with DropBox.

Also, seeing things like this and how Dropbox always wants accessibility access on the Mac just turn me right off.

Xaositek
Updates to iCloud Drive sharing put the final nail in Dropbox’s coffin for me. I’ll keep the web interface for folks that share files to me but my reliance upon their service has at this time vanished.
Score: 6 Votes (Like | Disagree)

vicviper789
Great! Now if only I can collaborate with more than 3 of my devices logged in
Score: 5 Votes (Like | Disagree)

orbital~debris
Sounds like the death throes of a company in trouble, hoping to pull off a paradigm shift to enable new streams of revenue.
Score: 4 Votes (Like | Disagree)

maflynn
I've long stopped using dropbox, especially since they nerfed how the number of devices. I don't know if many enterprises uses dropbox, but I think if they're using office 365 they'll be using OneDrive and there isn't a need for dropbox.
Score: 4 Votes (Like | Disagree)

drumcat
They are in deep poop. Once they limited my devices, I was done with them. I think they overestimated their market position. They needed to emphasise their independence, multi-platform, and ubiquitous nature, and renewed sense of security. Instead, they went all Microsoft BOB on us. Shame.

If they’d have synced things as a competitor to iCloud, they’d have had a chance.
Score: 4 Votes (Like | Disagree)
Read All Comments