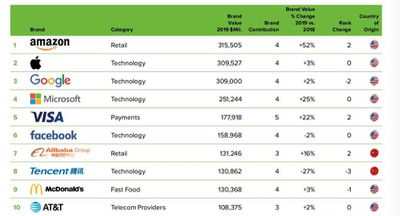 According to the BrandZ Top 100 Most Valuable Global Brand ranking 2019 [PDF], the ecommerce giant saw its brand value rise to $315.5 billion, beating second-placed Apple's $309.5 billion evaluation and Google's $309 billion in third. Apple's brand value saw a 3 percent rise over last year, while Google saw a 2 percent rise, but Amazon outshone both with a whopping 52 percent gain.

Amazon's rise to the top spot ends a Google-Apple duopoly that began in 2007 when Google surpassed Microsoft to capture the No. 1 rank. Apple and Google had since jostled amongst each other for the position, but Google took the top spot from Apple in 2018.

Doreen Wang, Kantar’s global head of BrandZ, told CNBC that Amazon's jump was due to it selling a variety of services.

"Amazon’s phenomenal brand value growth of almost $108 billion in the last year demonstrates how brands are now less anchored to individual categories and regions. The boundaries are blurring as technology fluency allow brands, such as Amazon, Google and Alibaba, to offer a range of services across multiple consumer touchpoints."

The top ten most valuable global brands in the report is made up almost entirely of technology and telecom companies, with Microsoft, Visa, Facebook, Alibaba Group, Tencent, McDonald's, and AT&T rounding off the top ten after Amazon, Apple, and Google.

To qualify for the ranking, brands must be publicly traded, or publish their financial results. BrandZ’s list uses measures of brand equity based on interviews with over 3 million consumers about thousands of brands, with analysis of each company and financial performance, using data from Kantar Worldpanel.

Brandz is one of several brand rankings released each year, with others including Forbes and Interbrand. Apple has consistently performed well in these studies over the past decade as its revenue has ballooned on the strength of iPhone sales, but the company is increasingly looking to subscription services, original content, and other untapped markets to prop up its business in the face of the recent downturn in the global smartphone market.

Gorms
Big shout out to all the Amazon employees working in terrible conditions without whom none of this would be possible
Score: 37 Votes (Like | Disagree)

For me Amazon is the lowest of the low for online sales. They can do a ton of volume but the quality sucks, customer service is a nightmare and all the Amazon branded products are cheap junk.

Hmmm, I know it’s anecdotal, but I’ve never had an issue with Amazons customer service. In fact, quite the opposite. Anytime I’ve had an issue they have been quick to resolve. YMMV.
Score: 31 Votes (Like | Disagree)

For me Amazon is the lowest of the low for online sales. They can do a ton of volume but the quality sucks, customer service is a nightmare and all the Amazon branded products are cheap junk.

Literally everything you said I have exactly the opposite opinion (and experience).
Score: 21 Votes (Like | Disagree)

I love Amazon. Is one of my favorite companies.

For me Amazon is the lowest of the low for online sales. They can do a ton of volume but the quality sucks, customer service is a nightmare and all the Amazon branded products are cheap junk.
Score: 17 Votes (Like | Disagree)

BvizioN
I love Amazon. Is one of my favorite companies.
Score: 10 Votes (Like | Disagree)
Read All Comments