The contactless tickets available in Apple Wallet will allow event attendees to enter stadiums with just their iPhone and Apple Watch using NFC. Apple Pay chief Jennifer Bailey said that students and fans will love having their tickets right on their Apple devices. 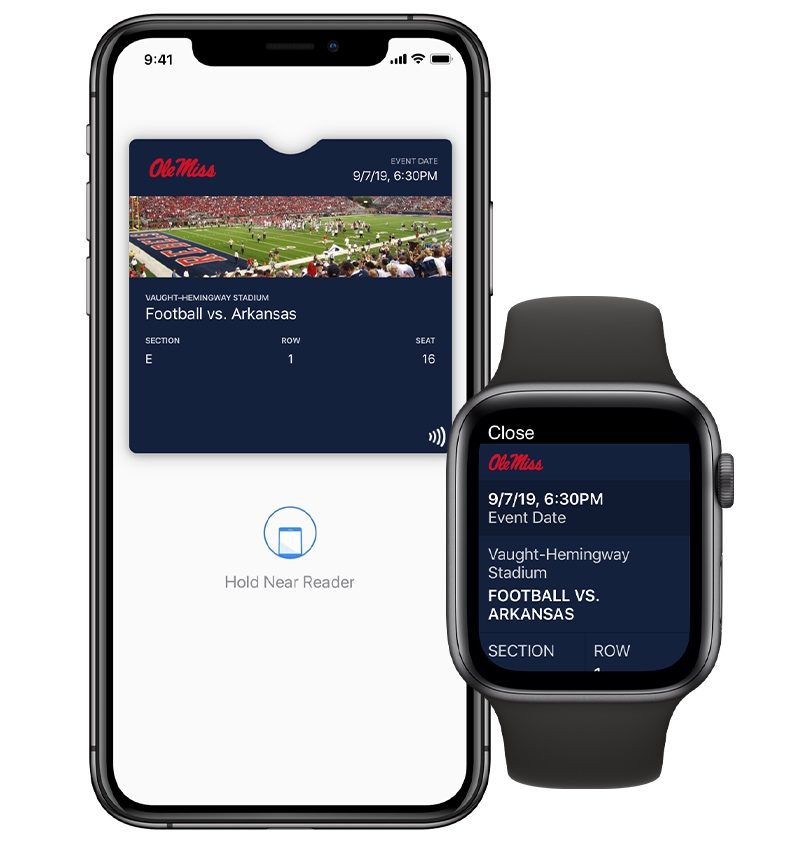 "‌iPhone‌ and ‌Apple Watch‌ make going to college sports games easier than ever," said Jennifer Bailey, Apple's vice president of Internet Services. "We've said our goal is to replace the physical wallet and students and fans will love the convenience and security of having their tickets right on the Apple devices they carry with them every day."

‌iPhone‌ and ‌Apple Watch‌ users will receive purchased tickets via the Messages app and can add them into the Wallet app by tapping on a link. When at a stadium, the tickets will pop up on the ‌iPhone‌ or ‌Apple Watch‌'s display.

Paciolan says that NFC-based tickets will help cut down on fraud at the gate and will allow colleges to better understand who is attending games.

Optheduim
Glad people are finally unleashing NFC, but once the Yankees and the NY Giants accept it things will be much better!!

Oh and I would love the purge my office NFC card for something on my phone too! (<--- is there tech for this yet??)
Rating: 3 Votes

RevTEG
My Ole Miss Rebels made it Macrumors!
Rating: 2 Votes

Interesting. Ticketmaster doesn't use NFC but lets you put a QR code in your Apple Wallet. A security guard at a concert could believe it when he saw the ticket-taker scanning my watch and it worked.


Ticketmaster is going to be using NFC tickets for the 2019 NFL season. Any concerts at those NFL stadiums will also use NFC tickets.
Rating: 1 Votes

I use Apple Wallet for every single plane trip, if at all possible. The boarding pass conveniently shows itself on the lock screen starting a few hours before the flight, and you can bring it up right from there every time you need to show it. Since those are scanner-based, the phone also does you the favor of maxing out your screen brightness temporarily so you get a clean scan.


I agree and use Wallet any time I can. However, the boarding pass always seems to turn off right when I'm placing it down. There should be an option to keep the pass on the screen indefinitely until you turn it off. The 30-60 seconds it currently stays on is too short. I also try to move the pass with my screen in an effort to refresh this timer, but it doesn't seem to work. 40% of the time it shuts off immediately once I flip the screen over to scan it. Super annoying.
Rating: 1 Votes

Glad people are finally unleashing NFC, but once the Yankees and the NY Giants accept it things will be much better!!

Oh and I would love the purge my office NFC card for something on my phone too! (<--- is there tech for this yet??)


I used the Seatgeek app, and added my Yankees tickets to my Apple wallet for a Yankees game this season. At the door, they scanned my Apple wallet, and I was allowed in.
Rating: 1 Votes

Ohples
Interesting, I might actually attend a college sports game to test this out.
[doublepost=1560200997][/doublepost]

Some colleges are doing this now, my guess is at some point HID or whatever will get on board for the corporate stuff
Rating: 1 Votes