More evidence has emerged to suggest that Apple is beginning to move away from its iTunes brand after over 18 years of use. 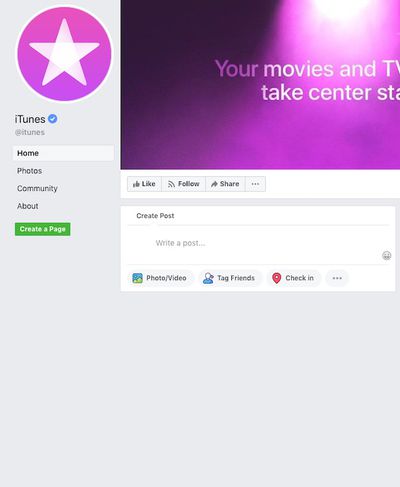 As far as we can tell, it looks like Apple has migrated its iTunes page to its Apple TV page on Facebook, including not only all of the content but nearly 30 million likes and its original April 29, 2009 creation date.

Apple has also removed all photos and videos from its iTunes profile on Instagram, which points users towards the newer Apple TV page on Instagram, but its Twitter counterpart still has content for now.

The blank pages likely foreshadow bigger moves to come, as Bloomberg's Mark Gurman and 9to5Mac's Guilherme Rambo have both reported that iTunes will be replaced by standalone Music, TV, and Podcasts apps in the next major version of macOS, which Apple is expected to unveil at WWDC 2019 on Monday.

Notably, while the overall iTunes app as we know it is expected to be discontinued, the reports did not suggest that the iTunes storefront for purchasing music, movies, and TV shows is going away any time soon.

iTunes has attracted its fair share of criticism over the years for being bloated software, so its split into three separate apps would be much welcomed. Apple's phasing out of iTunes is likely to be a gradual process, however, so the brand could live on in some capacity for the foreseeable future.

Update: As noted by the Iconfactory's Craig Hockenberry, some itunes.apple.com links for songs and artists now redirect to music.apple.com, serving as yet another example of Apple moving away from its iTunes brand.

I haven’t seen it reported elsewhere, but as of last weekend all https://t.co/tCyWJ9I1D3 links redirect to https://t.co/c1nzdCWhSp — a likely indicator that the brand is done (the app will be fine for those of us who need it.) — Craig Hockenberry (@chockenberry) June 2, 2019

In fact, as noted by Kyle Seth Gray, it appears that Apple is in the process of dropping iTunes links for apps, podcasts, TV shows, movies, and books as well. Apple will instead use category-specific links such as apps.apple.com, podcasts.apple.com, tv.apple.com, movies.apple.com, and books.apple.com.

Some of these links are already live, while others work if the URL is manually changed.
Related Roundup: WWDC 2022
Tag: iTunes
Related Forums: Mac Apps, Apple, Inc and Tech Industry
[ 280 comments ]

trusso
There are many reasons I think sunsetting iTunes is a bad idea, though I acknowledge I may be in the [largish] minority on that. One reason, however, will be the complete crapshoot of online search results for the inevitable problems that require troubleshooting.

Generic names like Music, Photos and TV (etc.) will make it that much harder to find support articles for upcoming software problems. At least with names such as iTunes, GarageBand, or iPhoto, you could clue in on pertinent material much easier.

It's attention to the little details like these that really separates the great from the merely okay.

alexandero
I really hope they don't get rid of purchasing music. I have no interest in a subscription model – I'm oldschool, I like to "own" selected albums I love.
Score: 47 Votes (Like | Disagree)

Now they are both sad memes of themselves. The Charlie Sheen and Johnny Depp of tech if you will.
Score: 32 Votes (Like | Disagree)

Traverse
I just really hope the iTunes replacement is a well-designed and functional app. So many people hate iTunes, but I honestly like it. Other than random sync bugs it's fast on an SSD iMac and organizes/plays all my media without issue. I haven't found any alternative I like better.
Score: 31 Votes (Like | Disagree)

tallPete
Interesting to do it today. Because iOS, macOS etc are not due out for a few months. So if they are deleting today are we due for an early release of these products? iTunes typically updated out of cycle?
Score: 25 Votes (Like | Disagree)

Kobayagi
I seriously cannot understand all the complaints about iTunes. Unless I'm really under utilizing it, it works perfect for music, as a matter of fact, it's playing my music right at the moment. The album view is great, my music is sorted by genre and artist too, so I can quickly find the song I'm looking for. Lyrics work great as well. I also do use it to sync music to my iPod(s) and that also works flawlessly, so that's not it either. Maybe you guys are shopping through it and that doesn't work as it should?

If somebody could quickly summarize what they don't like about it, I'd greatly appreciate it. I hope the next app is, well largely the same... because I cannot find anything so wrong about it that it desperately needs a replacement and all the hate it gets. I just hope Apple doesn't dumb it down and messes up our neatly crafted music libraries.

(and yes, I'm running the latest version of iTunes, so it's not some old but great version of it which people can't let go)
Score: 24 Votes (Like | Disagree)
Read All Comments