Powerbeats Pro Water Resistance Test: Find Out What Happens if You Drop Apple's Newest Earbuds in the Toilet

Apple's new Powerbeats Pro earbuds feature a "reinforced design" for improved "sweat and water resistance" along with an official IPX4 water resistance rating, which means they should be able to hold up to a good amount of moisture.

Still, there were a lot of reports of the Powerbeats 3 failing due to sweat exposure, so we thought we'd test the liquid tolerance of the ‌Powerbeats Pro‌ with a series of water resistance tests.

Subscribe to the MacRumors YouTube channel for more videos.
An IPX4 water resistance rating means that the ‌Powerbeats Pro‌ were able to withstand splashing water for at least 10 minutes, which is pretty decent because most people don't sweat buckets of water for an extended period of time. 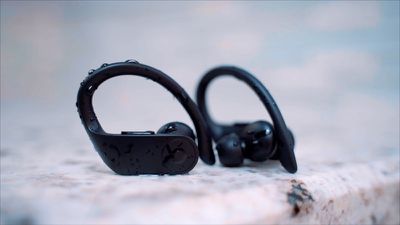 We tested splashing water, jets of water, and even an extended dunk in water, and the ‌Powerbeats Pro‌ held up and worked well after every single test. Here's what we did:

After each water test, the sound coming from the ‌Powerbeats Pro‌ was muffled when we tested them, but once we got the water out, the earbuds were back to sounding normal.

The ‌Powerbeats Pro‌ survived all of our water tests. Nothing changed with the sound profile, the buttons continued to work, and charging was also fine. This suggests that the ‌Powerbeats Pro‌ do indeed have superior water resistance to the Powerbeats 3 and should hold up well to sweat.

While the ‌Powerbeats Pro‌ did well in our tests, we've only continually exposed them to water and moisture for a couple of hours. We still don't know how they'll hold up to sweat over time, but right now, things are looking positive.

pj-uk
Why put them in a toilet when a bowl of water would do? :confused:
Score: 98 Votes (Like | Disagree)

scottinlexky
anything with Beats on it deserves to be flushed down toilet
Score: 29 Votes (Like | Disagree)

hagjohn
They would not be going back into my ears, if they fell in the toilet.
Score: 17 Votes (Like | Disagree)

anything with Beats on it deserves to be flushed down toilet

Apple owns the company now so I’m sure quality has increased.
Score: 15 Votes (Like | Disagree)

walnuts
Despite not having a waterproof rating, I've run and biked through lots of sweat and rain with AirPods and never had an issue. I could only assume that these would be better.
Score: 9 Votes (Like | Disagree)
Read All Comments

Thursday December 8, 2022 7:05 am PST by Joe Rossignol
iOS 16.2 is expected to be released next week following nearly two months of beta testing. With last-minute additions like Apple Music Sing and Advanced Data Protection, the software update now has over a dozen new features for the iPhone. Below, we've recapped many of the new features coming with iOS 16.2, including Apple's new whiteboard app Freeform, two new Lock Screen widgets, the...
Read Full Article • 69 comments