Instagram has considered hiding the like count on images uploaded to the social network, which would prevent people from seeing how many people have tapped the "heart" icon on each photo.

The feature was found by Jane Manchun Wong, who often hunts down features in testing in Instagram and Twitter. As depicted in an image shown by Wong, the like count on a photo is hidden by default and visible only by the person who posted the photo. 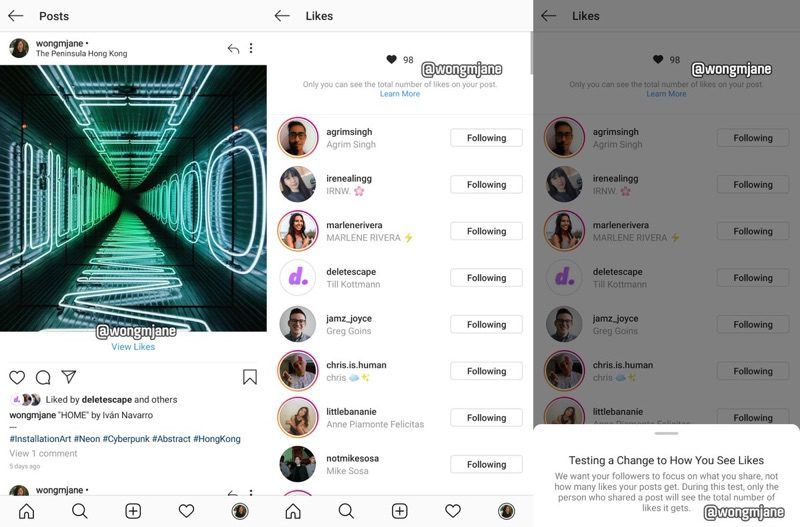 "We want your followers to focus on what you share, not how many likes your posts get. During this test, only the person who shared a post will see the total number of likes it gets," reads the description of the feature.

In a statement to The Verge, however, Instagram says that the feature is not being tested at the current time: "We're not testing this at the moment, but exploring ways to reduce pressure on Instagram is something we're always thinking about.

Hiding likes would fundamentally change the way Instagram works, as liking photos and garnering likes is one of the platform's main features.

Saipher
This would be great! I believe a lot of teens, and some adults too, feel pressured to receive likes as a measure of their social acceptance or status. This would alleviate the problem.
Rating: 24 Votes

Intellectua1
There goes a lot of Instagram models careers, they should hide the followers count too, that'd be hilarious!
Rating: 19 Votes

JoEw
Strangely I think this would be good for the platform long term, the like thing is quickly becoming a poison on people’s minds. Instagram doesn’t want to be the next Facebook. They should double down on photos.
Rating: 11 Votes

DBZmusicboy01
Facebook is killing Instagram more and more everyday :( this is ridiculous
Instagram used to be amazing back in 2012-2016 but ever since 2017 it has gone to crap.
Rating: 8 Votes

This would be great! I believe a lot of teens, and some adults too, feel pressured to receive likes as a measure of their social acceptance or status. This would alleviate the problem.

I think that’s one of the main reasons they would consider doing this. It would also be a good step in the right direction to deal effectively with the glut of influencers and wannabe influencers who have made the service a bloated, meaningless shell of what it once was. They could create a separate app for influencers called Instafluencers (which they would charge a fee for) and keep the commercialization/influencer bloat out of Instagram. When you have too many influencers peeing in the same pool, people will begin to reconsider their decision to get into the pool.
Rating: 6 Votes

iBreatheApple
I’m for it but people who use this as a monetary/business platform are gonna be piiiised. Likes and metrics are what get people (models, DJs, whoever) bookings.
Rating: 5 Votes

nfl46
I like this idea! I know some people who lose their minds if their post doesn’t get x amount of likes. Yeah, I know, it’s beyond ridiculous!

squizzler
This will be so good for mental health of users. Way to go!
Rating: 4 Votes

Facebook is killing Instagram more and more everyday :( this is ridiculous
Instagram used to be amazing back in 2012-2016 but ever since 2017 it has gone to crap.