iOS 12.2 Suggests ECG App May Be Coming to UK and Other European Countries With watchOS 5.2

After installing iOS 12.2, some Apple Watch Series 4 owners in the UK are seeing new ECG screens that suggest ECG functionality will expand to the Apple Watch in the country when watchOS 5.2 is released.

MacRumors readers Sam and Chris have seen ECG setup screens in the Apple Watch and Health apps on the iPhone after installing iOS 12.2. The app is not, however, available on the Apple Watch in the UK right now because Apple hasn't yet released watchOS 5.2, which is likely required for the feature to work. 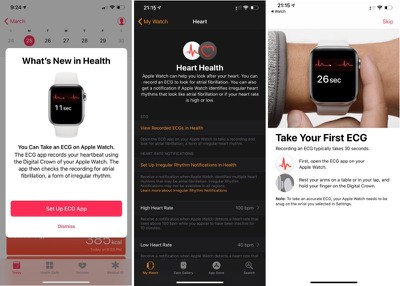 There's new documentation in the Health app in iOS 12.2 under ECG's "Instructions for Use" that also hints at upcoming support for the UK and other European countries:

There's also a new CE mark for the ECG feature in iOS 12.2 in the same document, which, as 9to5Mac points out, indicates that Apple may be planning to expand ECG functionality to all European Economic Area countries that use the CE certification mark.

It's not yet clear when Apple will launch watchOS 5.2, but with iOS 12.2 already available, it could be coming in the near future. Apple has not updated the list of countries where ECG features are available, but it could be changed once watchOS 5.2 sees a release.

Good, now all the complaining about US-only release can stop. Wonderful.

The moaning was justified and I also hope it will be over soon.
Score: 11 Votes (Like | Disagree)

ondert
I was waiting for this feature to get one, but after many months, I'll skip this one.
Score: 4 Votes (Like | Disagree)

haruhiko
A new era of Apple where everything is US only.
Score: 3 Votes (Like | Disagree)

The moaning was justified [..]

JTBing
Good, now all the complaining about US-only release can stop. Wonderful.
Score: 3 Votes (Like | Disagree)
Read All Comments