Apple plans to close both of its retail stores within the Eastern District of Texas in a few months from now in an effort to protect itself from patent trolls, according to five sources familiar with the matter. 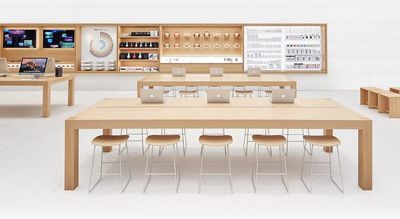 Apple Willow Bend in Plano, Texas and Apple Stonebriar in Frisco, Texas, both located in the northern suburbs of Dallas, are expected to permanently close in mid April. One source said each store's final day of business will be Friday, April 12. Employees were briefed about the plans earlier this week.

To continue to serve the region, Apple plans to open a new store at the Galleria Dallas shopping mall in Dallas, just outside the Eastern District of Texas border. One source said the store will open Saturday, April 13.

A rough visualization of Apple's retail stores in the Eastern District of Texas and its upcoming Galleria Dallas store
The plans are significant, as U.S. law states that patent infringement lawsuits may be filed "where the defendant has committed acts of infringement and has a regular and established place of business." By closing its stores in Eastern Texas, Apple is ending its established place of business in the district.

Residency is also a factor in determining the applicable venue of a patent infringement lawsuit, but in May 2017, the Supreme Court shifted precedent by ruling that a U.S. corporation resides only in its state of incorporation. Apple is incorporated in California, not Texas, satisfying this clause.

The Eastern District of Texas has been a hotbed for patent litigation over the past few decades due to well-established rules for patent infringement cases, experienced judges, lower probability of cases being transferred to another district, and quicker jury verdicts, according to a SMU Dedman School of Law paper.

Fortunately, we're hearing that the plans, while inconvenient, are not too detrimental for employees. One source said Apple has offered employees opportunities to transfer to other stores, work from home for AppleCare, or severance to those who are not interested in working at another Apple location.

Apple has yet to publicly announce the plans. We reached out to Apple for comment late Thursday but have yet to hear back.

Update: Apple has confirmed the impending store closures in a statement issued to TechCrunch:

We're making a major investment in our stores in Texas, including significant upgrades to NorthPark Center, Southlake and Knox Street. With a new Dallas store coming to the Dallas Galleria this April, we've made the decision to consolidate stores and close Apple Stonebriar and Apple Willow Bend. All employees from those stores will be offered positions at the new Dallas store or other Apple locations.

Apple did not provide a specific reason for the store closures beyond consolidation.

Winter Charm
Well, the eastern district of texas gets their just desserts for making it so easy for patent trolls to file there... GG.
Score: 45 Votes (Like | Disagree)

JetTester
Patent trolls are evil. Whatever it takes...
Score: 36 Votes (Like | Disagree)

Talk about spitting your dummy out. Is that how pathetic Apple really have become?

It's more how pathetic patent law has become in the US that Apple has to take this step to protect themselves.
Score: 35 Votes (Like | Disagree)

Talk about spitting your dummy out. Is that how pathetic Apple really have become?

Say you had 20 convenience stores. 18 are doing fine. 2 of them in Downtown Detroit keep getting robbed, you're losing money there. Is it pathetic for you to stop serving Downtown Detroit?
Score: 33 Votes (Like | Disagree)

In terms of filing, the rules in EDTX are the same as every single other district in this country.

It isn't the rules, it is the judicial environment. They'll still get sued, but in districts where the outcome isn't heavily favoring the trolls. It is like home field advantage for the trolls. If you want supporting evidence of biased judicial environment, just look up Madison County IL. It has repeatedly earned the title of Judicial Hellhole, mostly due to asbestos cases.
Score: 23 Votes (Like | Disagree)

cmaier
Surprised it took them this long.
Score: 21 Votes (Like | Disagree)
Read All Comments