Apple continues to aggressively market the iPhone XR, with one of its latest tactics being customized emails to owners of older iPhone models with a trade-in value of the older device and a tech specs comparison with the iPhone XR. 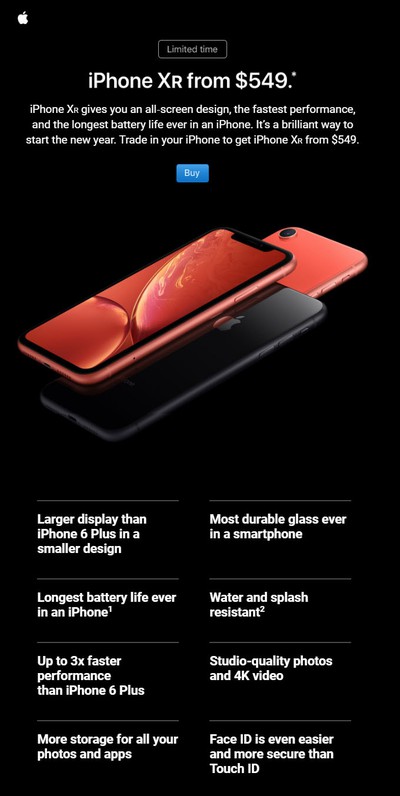 An email sent to an iPhone 6 Plus user, for example, advertises Apple's limited-time $200 trade-in offer for that device towards the purchase of an iPhone XR in the United States. The email also states that the iPhone XR is up to three times faster than the iPhone 6 Plus and compares other features.

Apple appears to have started sending out these emails late last year, but we saw several mentions of the campaign on Reddit and Twitter today, suggesting that Apple may have sent out a second wave of emails to additional customers.

Apple issued a rare revenue downgrade of up to $9 billion for the first quarter of its 2019 fiscal year, a move that it attributed entirely to fewer iPhone upgrades than it anticipated, primarily in the Greater China region. Apple believes simplifying its process of trading in a phone is one way it can improve its results.

Aluminum213
Remember when apple was able to sell a device based on its own merits?
Score: 99 Votes (Like | Disagree)

Rob_2811
If you own an iPhone 6 or older expect a personal FaceTime from Phil Schiller. :eek:
Score: 69 Votes (Like | Disagree)

Remember when apple was able to sell a device based on its own merits?

Long since past are those days I'm afraid.
Now its more 'buy the latest iToy so you can stay fashionable'. I'll pass on that noise.
Score: 35 Votes (Like | Disagree)

StevieD100
Sorry Apple that's NOT going to happen.
I don't want a bigger phone. I may upgrade from a '7' to an '8' in a few months but that's it. I won't go larger. I simply don't need a Phablet sized device. The 7 and 8 fit nicely in the phone pocket of my Motorcycle Jacket. Anything larger and it won't go.
I can't be the only one who does not want Phablets?
Score: 32 Votes (Like | Disagree)

Saturday May 15, 2021 11:08 am PDT by Juli Clover
Twitter has been working on some kind of subscription service since last summer, and Jane Manchun Wong, who often digs into new features coming in apps, has shared details on just what Twitter is exploring. Twitter's subscription service could be called Twitter Blue, and at the current time, it's priced at $2.99 per month. There will be a "Collections" section that allows users to save and...
Read Full Article • 83 comments