Apple Begins Selling LumaForge Shared Servers With Up to 200TB Storage and Prices Up to $50,000

LumaForge today announced that its Jellyfish shared storage solutions are now available for purchase from Apple's online business store, with ultra-high capacities up to 200TB at ultra-high prices of up to $50,000 in the United States. 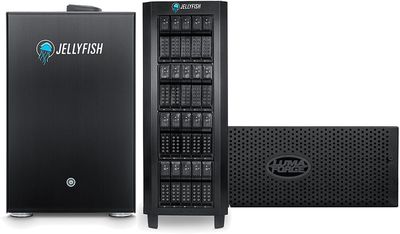 There are three shared storage solutions:

Macs can be connected directly to a Jellyfish server using standard 1- or 10-Gigabit Ethernet cables. Once connected, the Jellyfish Desktop App for macOS automatically completes the setup process. All three have RAID protection.

In related news, LumaForge announced that Steve Bayes has made a significant financial investment in LumaForge and will join its newly formed Board of Advisors. Bayes was the senior product manager of Final Cut Pro at Apple for more than 12 years before retiring from the company in July 2018.

:eek: That has to be incorrect.


Nah that sounds right in line with Apple’s pricing on storage.
Score: 33 Votes (Like | Disagree)

Simmias
I ordered three of the 200TB models to back up my photo and adult video collections.
Score: 23 Votes (Like | Disagree)

bstpierre
Are they compatible with Time Machine?
;)
Score: 16 Votes (Like | Disagree)

That's about inline with what Apple charges.

I'm under the impression that there's another, cheaper solution for archiving petabytes of stuff just for incase, where being able to have dozens of people access it is... not a requirement.

I work as a colorist, a terabyte is nothing these days. If you work with RED Helium footage, Phantom Flex, or ARRI RAW, you can easily fill up 20TB on a feature or 6-7 episodes of TV. As a consumer, its hard to imagine filling that much space, but at our business we go through 8TB a month in archive, 4-6 in working projects, then any features or tv shows are much much more (And we are a small shop). Then you have to remember that each of those should be backed up, so you double or triple that.
Score: 16 Votes (Like | Disagree)

They are not backup servers.

Hobbyists don't understand that DIY solutions don't work when money is on the line.
Score: 13 Votes (Like | Disagree)

That's about inline with what Apple charges.

I'm under the impression that there's another, cheaper solution for archiving petabytes of stuff just for incase, where being able to have dozens of people access it is... not a requirement.

At the studio I was responsible for 8 years ago we recorded about 1.6 TB of DVC Pro HD content per 8 hour day (50GB per hour times 4 cameras). This does not include audio. The studio ran 6 days per week often for 10 or 12 hours per day. Each program took several weeks to record and we had a dozen or so editors working from the SAN editing the programs with the intent to complete production before we ran out of storage. Which we often did and had to archive material off the SAN before its time.

These storage numbers seem kind of low to me considering 4K content. We paid 4 to 6 times these prices for our SAN. These seem like a good deal, for the purpose intended.
Score: 12 Votes (Like | Disagree)
Read All Comments