Apple marketing chief Phil Schiller today made a surprise appearance at Adobe's MAX conference, which saw Adobe previewing a full version of Photoshop on the iPad, set to be released in 2019.

Adobe's upcoming version of Photoshop is "not watered down" and is version of Photoshop with all of the assets and tools needed to create the same projects you can make on the desktop on the iPad. According to Adobe, Photoshop for iPad would not have been possible without the company's close work by Apple and the power of the iPad Pro. 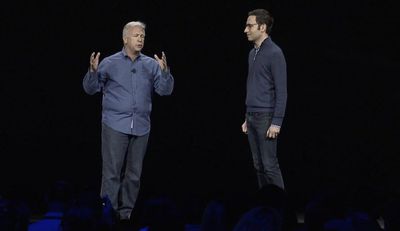 According to Phil Schiller, Adobe is excited about the upcoming version of Photoshop for iPad and can't wait for everyone to get it. Adobe, says Apple, has understood its vision for the iPad since the beginning. Apple "cares deeply" about the evolution of the iPad into a tool essential for creative workflows.

At Apple, we care deeply about the evolution of the iPad into increasingly a tool that is essential to a creative workflow. That's why over the last few years we've been creating the iPad Pro line and we've been building unique technologies like our A-Series chips, special versions of that with the CPU and GPU performance for professionals.

We've been building in displays unique for professionals like our 12.9-inch Retina display with ProMotion technology and really fun tools like Apple Pencil, which is perhaps one of our most advanced technologies, but it's so fun and accessible to use. And Adobe has recognized that from the beginning.

Adobe has understood the potential of the iPad Pro and our teams have been working together on some really amazing technology.

Schiller went on to say that Adobe's announcements today are "the beginnings of the world" seeing the kind of work that Apple and Adobe are able to do together. The new version of Photoshop for iPad will appeal to current Photoshop users, but also to a new generation of creators "looking for an entirely mobile workflow" that's more accessible, more intuitive, and simpler to use.

Along with Photoshop for iPad, Adobe today also unveiled Project Aero for creating AR experiences, and Schiller reiterated that AR is "hugely important" to Apple. "We have a vision where we think that will impact all of our lives," he said.

When questioned about the role of the creative professional at Apple today, Schiller said that creativity has been a part of the foundation of Apple from the beginning, both internally and externally.

As I think back on it, I know Steve showed us all the idea that people with passion can change the world. Those words mean a lot to us. We think long and hard about what Apple's role should be supporting Adobe and all of our other users out there.

It is that old line that Steve said: 'We exist at the intersection of technology and lieral arts' and that focus on creativity and the arts to unleash that passion, unleash that vision is just as important to us today as it was from the very, very beginning. None of that has changed.

What has changed is the technology. When we talked about that we never envisioned a world where we would be running Photoshop on an iPad Pro wherever you are. I mean, that's just mindblowing.

Following Phil's discussion of Photoshop in iPad, the Photoshop team gifted him with a jacket that references a new feature in the Photoshop updates announced today -- Content Aware Fill powered by Adobe Sensei. The jacket gifted to Schiller plays on that with the phrase "Content Aware Phil."

Adobe plans to release Photoshop for iPad in 2019, but has not yet provided a more specific launch date.

AngerDanger
Ah, content aware fill. There isn't a day that goes by I don't use this feature. In fact…

Return Zero
That jacket is so dumb and I love it
Score: 20 Votes (Like | Disagree)

ipedro
Make no mistake: Adobe sees the future and migrating its flagship application to iPad is an endorsement of the device as where the industry will be in for the long term.

The future of professional photography post production is on the iPad and the iPhone, not the Mac. We’ve all seen the resistance to this concept every time someone says that the iPad is a consumption device. Yet, as a professional photographer, I’ve been living it and proving them wrong. I’ve been using my iPad Pro as my primary editing device for 2 years now. I didn’t replace my MacBook Pro and let it sit in a drawer (haven’t seen it in months).

What makes this possible is Adobe Cloud. Cloud editing is seriously fantastic for a professional. I shoot, then wirelessly upload from my camera to my iPhone X on location. I do some culling on my iPhone X, edit and share a few photos from the field, then get to my iPad Pro back in my studio where the photos are waiting for me with the applied edits. I do most of the editing work on the iPad Pro, directly manipulating photos, then swiping to the next one. It’s way faster than a mouse based process. I go to my iMac to finalize everything and upload the photos to my site with a plugin, ready for the client to download. If I notice something after uploading and make any changes on any of my devices, the files on my site also update.

It works seamlessly and incredibly well, with each device used according to its strengths. Increasingly, the Mac has fewer and fewer advantages over the iPad Pro in this workflow. I spend the least amount of time on my iMac, using it only for local storage and uploading hi-res files to my site. It’s a step I can skip when I decide to go full Cloud.

Google said it best when they unveiled their new Chrome OS tablet: “Other tablets are nothing more than large phones.”

Google is right. iOS is iOS, regardless of the device. It’s no wonder that Adobe’s earlier iteration of Photoshop (and other mobile products) for the iPad were so crippled and useless.

If Apple wants to market the iPad as a tool, it needs an OS tailored for the iPad Pro (iOS Pro?)

And Chrome is nothing more than a web browser. ;)
Score: 13 Votes (Like | Disagree)

usersince86
Subscription based, no doubt... :cool:
Score: 13 Votes (Like | Disagree)

It’s Adobe which means subscription, which means no thank you. I’ll eventually learn affinity photo instead when time permits etc.

There's another reason I for one don't like adobe, it litters you Mac with files all over the place.
Is it so hard to just follow normal App guidelines, like all files included in the App, preferences in one place and one support folder, seems not, there's plenty more folders where Adobe files are found.
I find their Apps "viruses".
Score: 10 Votes (Like | Disagree)
Read All Comments