Apple design chief Jony Ive sat down with Vogue's Anna Wintour this morning for an interview at WIRED's 25th anniversary event, where he talked about secrecy at Apple, his future with the company, and more.

WIRED didn't stream the event, but CNET's Shara Tibken and Washington Post's Geoffrey Fowler were on hand and shared details on what Ive had to say on Twitter. 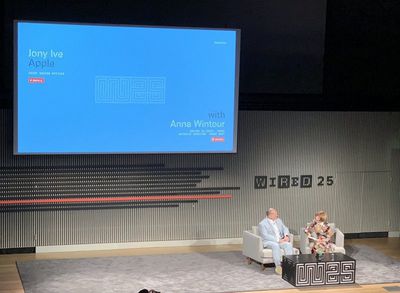 Image via Shara Tibken
On the topic of iPhone addiction, Ive said that it's good to be connected, but the "real issue" is what's done with that connection. According to Ive, when it comes to innovating, it's impossible to predict all of the consequences. "In my experience, there have been surprising consequences," he said. "Some fabulous and some less so."

Apple introduces new features like Screen Time because the company doesn't believe that its responsibility for a product ends when the product is shipped. Apple, says Ive, wants to design its technology to be more human to "restore some humanity" in the way people connect with one another.

When questioned about why Apple is so secretive and keeps its projects under wraps as much as possible, Ive said that not being secretive would be "bizarre." Not many creators would want to talk about what they're doing "when they're halfway through it," he said.

I've been doing this for long enough where I actually feel a responsibility to not confuse or add more noise about what's being worked on because I know that it sometimes does not work out.

According to Ive, he's at Apple for the long haul. He continues to see a lot to do with Apple, and is happy with the team that he works with. The "energy and vitality" at Apple is "extraordinary" and "very exciting" Ive said.

Ive: "If you lose that childlike excitement, I think then it's probably time to do something else.

Wintour: "Are you at that point?"

Ive is still learning at Apple with each new project, and when asked about the last thing he learned, he said that it was a detail on how you can connect glass to a structural frame. "We're still surprised and learning so much," he said.

It's not yet clear if WIRED plans to share the full interview Anna Wintour conducted with Jony Ive, but should a video or additional details be published, we'll update this post.

Update: WIRED has shared additional comments from Ive during the interview.

Minimalistic works for hands, not for eyes.
Score: 23 Votes (Like | Disagree)

AngerDanger
Whew, glad to finally read more from Ive. I was about to file this…

Minimalistic works for hands, not for eyes.

Why would he leave? Talk about a "dream job"

Ive probably works his butt off and he's earned it.
Score: 13 Votes (Like | Disagree)

Superhappytree
“According to Ive, he's at Apple for the long haul. He continues to see a lot to do with Apple, and is happy with the team that he works with.”

Sorry, but Ive lost his mojo after Jobs died. I appreciate what he’s done for Apple but also detest what he’s done to Apple since then. I realise that he was only ever so great because he had Jobs as his filter, now we are starting to see all his design flaws now that Jobs is no longer there to say no.
Score: 8 Votes (Like | Disagree)

Jesus, it sounds like this guy is going to be around for a long, long time.

Why would he leave? Talk about a "dream job"
Score: 7 Votes (Like | Disagree)
Read All Comments

Sunday June 26, 2022 7:36 am PDT by Joe Rossignol
iPhone 14 Pro models are widely expected to feature always-on displays that allow users to view glanceable information without having to tap to wake the screen. In the latest edition of his Power On newsletter for Bloomberg, Mark Gurman said the feature will include support for iOS 16's new Lock screen widgets for weather, fitness, and more. "Like the Apple Watch, the iPhone 14 Pro will be...
Read Full Article • 142 comments

Sunday June 26, 2022 2:52 pm PDT by Joe Rossignol
Following the launch of Apple's new 13-inch MacBook Pro with the M2 chip, it has been discovered that the $1,299 base model with 256GB of storage has significantly slower SSD read/write speeds compared to the equivalent previous-generation model. YouTube channels such as Max Tech and Created Tech tested the 256GB model with Blackmagic's Disk Speed Test app and found that the SSD's read and...
Read Full Article • 371 comments

Monday June 27, 2022 3:38 am PDT by Tim Hardwick
Polish developer Michał Gapiński has released a new and improved version of his "Tesla Android Project" which brings Apple's CarPlay experience to more Tesla vehicles than ever before. According to Gapiński, version 2022.25.1 provides "100% functional CarPlay integration for any Tesla," and comes with several new features and bug fixes. The project now supports DRM video playback so that...
Read Full Article • 137 comments