Introduced as a Kickstarter project in 2017, Astropad's Luna Display adapter turns any iPad into a second wireless display for the Mac.

The Astropad software alone is designed to mirror the Mac's display to an iPad, while the Luna Display, which plugs into a Mac using Mini DisplayPort or USB-C, extends the Mac display instead of mirroring it. 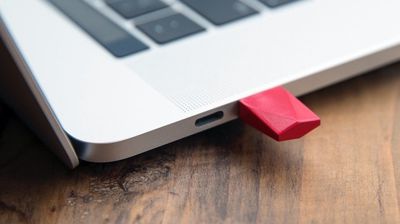 Once Luna Display is plugged into a Mac and the Luna Display software has been downloaded, a connected iPad serves as an extension of the Mac, letting Mac content be accessed directly from an iPad.

Astropad began taking pre-orders for Luna Display back in July, and with those orders fulfilled, the adapter is now widely available and can be purchased from the Luna Display website for $79.99.

goomba478
I got this from Kickstarter and it works infinitely better than Duet because of hardware/metal support. It single handedly saved me from buying a Wacom Cintiq. Works wonders :).
Score: 11 Votes (Like | Disagree)

BaccaBossMC
I would be concerned with Latency when using wireless. Also, Duet is (if I remember correctly) $10 and all you need is a lightning cable. Seems like a cool idea, but is pretty expensive for what it does.
Score: 8 Votes (Like | Disagree)

Duet became incredibly unreliable before it quit working a while back when an OSX update broke it. Is it working again?

It is working again. But the appalling attitude they (Duet) showed means I want to move to Luna instead. Their website made no mention that the product it promoted absolutely was not working at the time. Not on the front page, the sales page or the FAQ's. If you directly asked them they would point you at an update that helped a bit, but you had to ask. I wonder how users on the subscription model faired? They also blamed Apple for breaking it, when it was they who were using a hack. It looks like Apple may have begun some sort of support for this, so maybe it won't happen again. But Duet showed their colors here. Mostly brown.
Score: 6 Votes (Like | Disagree)

Duet became incredibly unreliable before it quit working a while back when an OSX update broke it. Is it working again?
Score: 6 Votes (Like | Disagree)

Bryan Bowler
I’m a backer from Kickstarter. Luna works great and is fantastic! Duet is not even in the same league. Highly recommend!!
Score: 6 Votes (Like | Disagree)
Read All Comments

Sunday December 4, 2022 7:38 am PST by Joe Rossignol
Mass shipments of Apple's long-rumored AR/VR headset may be delayed until the second half of 2023 due to unspecified "software-related issues," according to the latest information shared today by tech analyst Ming-Chi Kuo. Apple headset render by Ian Zelbo Kuo said mass shipments of components for the headset are still likely to begin in the first half of 2023, but he believes that mass...
Read Full Article • 145 comments

Monday December 5, 2022 11:44 am PST by Juli Clover
Due to production issues at Apple supplier factories in China, the iPhone 14 Pro and iPhone 14 Pro Max are backordered and basically out of stock at every store. If you were planning to gift or receive an iPhone 14 Pro model for the holidays and didn't already get one, you're basically out of luck because they're gone until late December. Subscribe to the MacRumors YouTube channel for more ...
Read Full Article • 166 comments