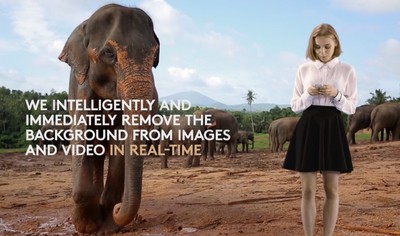 Spektral has developed a technology that can intelligently separate people and objects from their original backgrounds in photos and videos, and overlay a new background, resulting in what is called a "cutout." The solution is driven by deep neural networks and spectral graph theory.

The technology can be thought of as real-time "green screen" processing powered by machine learning algorithms:

Our pioneering and unique technology is based on state-of-the-art machine learning and computer vision techniques. Combining deep neural networks and spectral graph theory with the computing power of modern GPUs, our engine can process images and video from the camera in real-time (60 FPS) directly on the device.

The report says Apple acquired Spektral, formerly known as CloudCutout, in late 2017. Spektral co-founders Henrik Paltoft and Toke Jansen, who now lists himself as a manager of computational imaging at Apple, are said to have received 200 million Danish krone, or roughly $30 million as of today's exchange rate.


Spektral's website notes that its solution makes it possible to create unique and immersive mixed reality content. Apple could incorporate the technology into the default Camera app on iPhone, or Messages, or Clips, or use the technology in bigger ways as it continues to push into augmented reality.

Spektral was founded in 2014 and raised $3.3 million in venture capital prior to its acquisition by Apple, according to Crunchbase.

HiVolt
I'm calling it now. This feature will be announced for iOS13, and it will not be ready until 13.1.
Score: 11 Votes (Like | Disagree)

AngerDanger
YES! I’ve been waiting for this since Apple was rumored to release AR-based features!

Photo Booth also does an extremely naïve version of this using difference matte:

Okay, I'll ask. Who's the woman in the promo ad and video? :D

^^this user isnt creepy at all.
Score: 4 Votes (Like | Disagree)

BootsWalking
This seems like a perfect technology fit for adding background video (and images) to Animoji. The results should be sick!
Score: 4 Votes (Like | Disagree)

DoctorTech
This is really cool technology- taking what Apple already does (to a degree) to a whole new level. I can see lots of potential for incorporating this into iOS and especially putting it into “GlassesOS” or whatever they call the operating system for AR glasses.
Score: 4 Votes (Like | Disagree)

Friday July 23, 2021 8:07 am PDT by Sami Fathi
Yesterday, DigiTimes claimed that the upcoming iPad mini will feature a mini-LED display, but now, display analyst Ross Young is going at odds with that report, claiming that while the updated iPad mini continues to be on track for a release this year, it won't feature a mini-LED display. Young says he "confirmed" with Radiant Opto-Electronics, who DigiTimes claims would provide Apple with...
Read Full Article • 58 comments