Apple's iPhone XS and iPhone XS Max launched last Friday, and shortly after, some customers who purchased one of the new devices started noticing an issue with LTE and Wi-Fi speeds and connectivity.

According to multiple threads on the MacRumors forums, iPhone XS and iPhone XS Max users are experiencing connectivity problems with Wi-Fi and LTE on the two new iPhones when compared to other, older Apple devices. 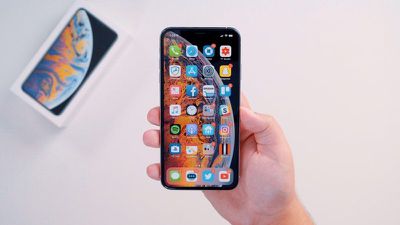 Multiple users have said that there are noticeable differences in cellular reception between the iPhone XS models and the iPhone 8 and iPhone X, with a 15-page thread suggesting this is a widespread problem that quite a few people are noticing. As described by MacRumors reader onepoint:

I'm in South Carolina on VZW. My iPhone X consistently holds 3 or 4 bars of LTE in my home with solid speeds.

Users are noticing fewer bars and poorer signal on iPhone XS and XS Max compared to devices like the iPhone 8 and iPhone X, especially in areas where signal is weak. Many of the complaints come from Verizon users, suggesting the issue could potentially be carrier specific. Multiple AT&T users, for example, have said the signal is the same or better, while Verizon users are seeing signal issues.

Some iPhone XS owners have theorized that the issue is related to Qualcomm vs. Intel modems. The new iPhone XS and XS Max are using Intel modems, while older devices used a mix of Qualcomm and Intel modems. AT&T iPhone 8 and iPhone X models used Intel modems previously, while Verizon iPhones had Qualcomm modems. As explained by MacRumors reader radiologyman:

Some AT&T and T-Mobile users are, however, complaining of connectivity problems too, while others have noticed better signal, leading to a confusing mix of user reports.

It's not clear if modem differences are causing the perceived connectivity issues that iPhone XS and XS Max owners are noticing or if there is a genuine bug with the new devices, but in the days following a new iPhone release, there are often carrier updates that can solve connectivity problems.

Given the confusing mix of information coming from users on the forums, the LTE connectivity problems may be related to software and could be fixed through the aforementioned carrier update or a software update from Apple, but we'll have to wait for more information to figure out exactly what's going on.

In addition to the LTE problems, there appears to be a separate issue with Wi-Fi. On the MacRumors forums, users began noticing slower Wi-Fi speeds on iPhone XS models compared to other Apple devices, which readers quickly deduced was a 2.4GHz vs. 5GHz Wi-Fi issue.

It appears that the iPhone XS and XS Max are preferring 2.4GHz networks over 5GHz networks when connecting to routers that use the same SSID for both the 2.4 and 5GHz bands. From MacRumors reader playtillyadrop:

I'm having the same problems. On my x it will hold the 5ghz connection compared to the XS max which likes to hold on to the 2.4ghz connection. I'm using google WIFI. All my nodes are connected wired. I know it's not my wifi and it's related to the xs max. It seems as if it prefers the stronger signal over throughput. My x performs better. I can check through the google wifi app and it takes forever for the xs max to pick the 5ghz connection.

With routers that do not have separate SSIDs for the two bands, it can be difficult to tell which you're connected to, leading to perceived slower connection speeds.

This is clearly a bug that needs to be addressed by Apple through an update to make the iPhone XS models prefer the faster 5GHz network to the 2.4GHz network, but in the meantime, providing separate SSIDs for the 2.4 and 5GHz bands can allow you to make sure your iPhone is connected to the 5GHz band at all times.

Some users have also had luck with resetting their network settings and/or forgetting their Wi-Fi network and reconnecting, but the iPhone XS models appear to default back to 2.4GHz often if not made to connect to the 5GHz network.

This connection issue appears to be at the root of most of the slow Wi-Fi complaints, but there have been a few other complaints of poor connection speeds when connected to a 5GHz network, so it's possible there's also something else going on.

We've contacted Apple to ask about both the Wi-Fi and LTE issues that customers are experiencing with the iPhone XS models and will let MacRumors readers know if we hear back.

nvmls
Yea Wi-Fi should be consistent on upcoming 2019 2k base models, thanks for beta testing, stay strong.
Score: 49 Votes (Like | Disagree)

Packers1958
It's the antenna, not the modem. FCC already shown that in their tests. WiWavelength posted the first article on the 12th prior to release of the new phones, and no one paid attention. The second is his followup. Without a doubt, Apple will blame the carriers and ignore us.

BMcCoy
Its nothing to do with the modem chips..

There are hardware antenna issues, and software issues too.
Score: 23 Votes (Like | Disagree)

So this is journalism?
Several readers in a forum report a problem and that is evidence for a story?

Not just this forum. The Apple forums contain many complaints, as do other forums.

And that's not all. There are several detailed articles concerning these iPhones RF Performance, especially in comparison with past iPhones. You could say this issue was predicted ten days ago. It's now coming to fruition. These articles, in combination with hundreds, if not thousands, of complaints, unquestionably justifies a front-page article. Doubly important given the short return window -- people need to be informed, and fast.

Your "this is journalism?" critique is incorrect.
Score: 16 Votes (Like | Disagree)