Belkin today introduced its BOOSTUP Wireless Charging Dock for wirelessly charging an iPhone and Apple Watch at the same time. There is also a USB-A port for charging a third device like an iPad via Lightning cable. 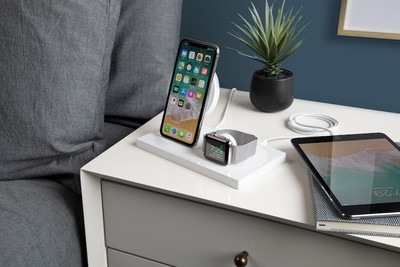 Belkin BOOSTUP Wireless Charging Dock
The dock is compatible with the new iPhone XS, iPhone XS Max, and iPhone XR, with wireless charging up to 7.5W, and all Apple Watch models at 5W/1A. It also works with the iPhone 8, iPhone 8 Plus, and iPhone X. The extra USB-A port also has an output of 5W/1A for wired charging of other devices.

The dock is certified under Apple's Made for iPhone program, compliant with the Qi standard, has the ability to charge through iPhone cases up to 3mm thick, and is compatible with Nightstand mode on the Apple Watch. The dock plugs into a wall outlet with a 45W AC adapter included for instant setup.

Belkin says the dock will be available in December at Apple Stores worldwide, priced at $159.99 in the United States.

Belkin also plans to introduce an updated PowerHouse Charge Dock for the iPhone and Apple Watch, for customers who prefer to charge their iPhone via Lightning connector. The new dock looks virtually identical to the previous version, but with a red-colored dial to raise and lower the Lightning connector.

kodos
At this price point and given that Apple Stores are selling them, speaks volumes about AirPower and its release.
Score: 6 Votes (Like | Disagree)

jermwhl
I was ready to buy until I saw the price. Yikes.
Score: 6 Votes (Like | Disagree)

HoosBruce
Hopefully people speak with their wallets on this one and this thing flops. $160??? What a joke....charging has never and will never be THAT much of a hassle.
Score: 5 Votes (Like | Disagree)

cwanja
$160 is LAUGHABLE. Get out of here.
Score: 3 Votes (Like | Disagree)
Read All Comments