Coming off the recent reveal of Philips Hue's latest fixtures, the lighting company today announced two new collections that will be available to purchase in October: "Hue Signe" and "Hue Play." While still providing all of the expected features of Hue lights -- including HomeKit support -- the new products have unique hardware builds and are aimed to enhance entertainment areas.

Starting off, the Hue White and Color Ambiance Signe Collection is a slim fixture with a solid base that comes in a Floor Light (standing at about 59 inches tall) and Table Light (just over 24 inches tall). The Signe is designed to be placed around an entertainment area and facing a wall, with indirect lighting reflection that reaches "up to the ceiling," according to the company. 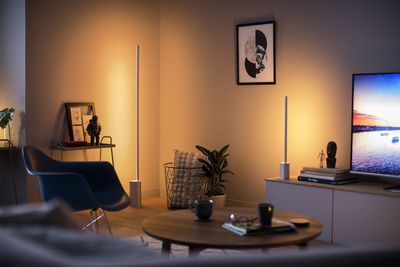 This means that two Signe lights bordering a television can also provide bias lighting while you watch a movie or play a video game. Because the collection supports Hue White and Color Ambiance, you'll be able to choose from 16 million colors and 50,000 shades of white light to light up your room.

The Signe does not support multi-zone lighting, so you can only emit one color from one lamp at a time, but the company notes that with multiple Signe lights set up in a room you will be able to mix and match colors from multiple sources.

Secondly, Philips Hue has revealed the Hue Play Collection, which is also aimed at family rooms and entertainment areas. The company describes Hue Play as a "light bar" that can be placed on an entertainment center, mounted behind a TV, or simply laid on the floor to add lighting to any space.

Three light bars can be plugged into the power source that comes in the fixture's base kit, which Philips Hue says was an effort to reduce the amount of electrical sockets needed for the lights behind your entertainment center.

In these setups, Hue Play can be placed both vertically and horizontally, providing even more opportunities for bias lighting behind a TV and pathway lighting in a hallway. The Hue Play measures 9 inches in length.

There are two kits that will be available for Hue Play: a Single Base Kit with one fixture for $69.99, and a Double Base Kit with two fixtures for $129.99. Pre-orders for Hue Play will go up in mid-September and then the collection will launch in mid-October.

If you purchase either one of these kits, Philips Hue will also sell a $59.99 Hue Play extension, which is simply another light bar at a slightly reduced price that you can add onto your existing setup by plugging it into the base kit's power source.

Like previous Philips Hue products, Hue Signe and Hue Play can be added into your existing HomeKit ecosystem, allowing you to control the fixtures with Siri, automate them to turn on and off at specific times of the day, and add them into your favorite HomeKit scenes. Philips' recently redesigned iOS app will also provide full control over the light color, scenes, rooms, automation, and more for Signe and Play.

Additionally, today is also the day that a variety of new Philips Hue lights and fixtures launch on the company's website. These include the Adore Vanity Mirror, Adore Ceiling Light, Being Pendant, and Enchant Pendant Light. Anyone looking to expand their outdoor space with smart lighting can also pre-order the Hue Outdoor Lightstrip beginning today, ahead of an early October retail launch.

I don't see the attraction of making your front room look like an Amsterdam bordello?

Neither do I, though I'm sure some people would like the look.

The other thing I don't see is why you fail to understand how these lights can be used to produce a large variety of unusual looks intended for a room that is primarily a fun entertainment space. Do you really think accent lights have to look like an Amsterdam bordello.

And I don't see why you feel it is appropriate to condescendingly insult those people who will enjoy a product that is clearly outside your interest and understanding. Let people enjoy what they want and just move on to the next article, nobody is forcing you to buy these lights. Do you honestly believe that no product should exist that you personally cannot comprehend or visualize after a solid 30 seconds of reflection. Talk about egocentrism.

And to close the circle, if someone actually does want to make their entertainment space look like an Amsterdam bordello, what gives you the right to criticize? I'm sure you do plenty of things that I (an many other people here) would find idiotic, yet we don't call you out on it.
Score: 21 Votes (Like | Disagree)

mattopotamus
Damn these look nice, but $500 is a little steep to add two to a room.
Score: 10 Votes (Like | Disagree)

Mydel
I wish they have a bulb that gives out the decent amount of light! I need bright light not a mood light...
Score: 8 Votes (Like | Disagree)

Dave.UK
Absoutely beautiful. Phillips really have got this area of the market sewn up.
Score: 8 Votes (Like | Disagree)

Another first world way of wasting money. Who wants to make their lounge look like a shop window in Amsterdam's red light district?

I really don't give a flying monkey what do you compare these lights too.
I have some in my living room and bedroom and love them. There are times when I want to relax and not be in complete darkness when I watch TV and not have bright standard light shining at my eyes. They also gradually wake me up in the morning without the need for a sound alarm! Are they the most have? Of course not. They are power efficient and last decades. I personally will buy more of these.
Score: 7 Votes (Like | Disagree)
Read All Comments