Reddit has announced the rollout of its customizable News tab feature to most users of its iOS app. After limited alpha testing of the tab over the last few weeks, Reddit says it has acted on feedback and introduced enough improvements for the next beta phase of testing to reach a wider audience.

The News tab appears to the left of the Home and Popular tabs, and brings together content from community subreddits that frequently share and engage with news. Content is divided into topics like Politics, Sports, and Technology, and users can further customize them to show only the subtopics they're most interested in. 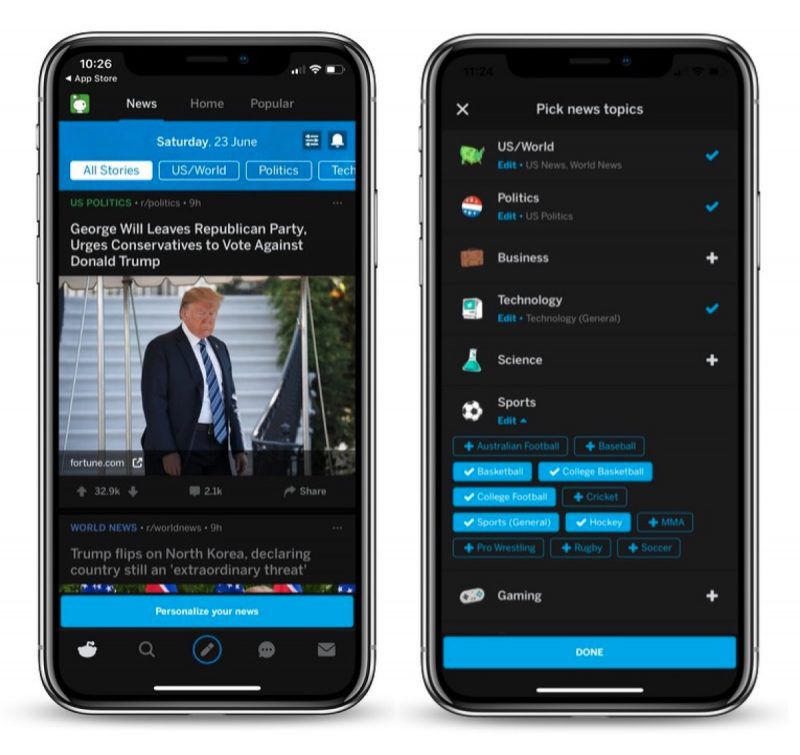 You told us you wanted more granular news topics (not just Sports but Baseball specifically), so we've introduced subtopics for you to personalize your News tab and notifications. You all told us you want to be able to see how different communities are talking about the same story. So, we are developing a community pivot feature that will show you multiple threads from different communities on the same article.

The Reddit app is a free download available on the App Store for iPhone and iPad. [Direct Link]

martyjmclean
First they need to roll out an app that’s as good as Apollo.
Score: 9 Votes (Like | Disagree)

I’ve heard lots of people saying Apollo is better. Having only used the official reddit app and being completely satisfied...what makes Apollo better?

Built by iOS developer to be compliant with iOS app guidelines. Gesture controls. No ads (that I’ve seen). I do miss the swiping between the home/popular tabs from the Reddit app. Just give it a try and see how you like it. There’s a free version and a pro version for 2.99 which includes bonuses such as custom icons, custom gestures, and automatic transitions into dark mode.

But mostly because the news tab on the original app is horrendous and such an eyesore.
Score: 4 Votes (Like | Disagree)

jmh600cbr
“The news tab appears to the left” no kidding
Score: 3 Votes (Like | Disagree)

I’ve heard lots of people saying Apollo is better. Having only used the official reddit app and being completely satisfied...what makes Apollo better?

Everything. It’s like, Apollo is an App how Steve wanted it to be if Reddit were his.
No seriously, you can change an many settings. You can even theme the logo lol.
Score: 3 Votes (Like | Disagree)

Lerxt
I hate how reddit constantly harasses you to sign in with every new page load. If I wanted to sign in, I would Reddit. Hopefully it won’t start bugging me about downloading a news app I don’t want.
Score: 3 Votes (Like | Disagree)

First they need to roll out an app that’s as good as Apollo.

I’ve heard lots of people saying Apollo is better. Having only used the official reddit app and being completely satisfied...what makes Apollo better?
Score: 2 Votes (Like | Disagree)
Read All Comments