In iOS 12, there's a new setting that will effectively put an end to law enforcement access to iPhones and iPads using USB devices like the GrayKey box, preventing USB accessories from connecting when it's been more than an hour since the iPhone was last unlocked.

Located under Touch ID & Passcode, the new setting, which requires a passcode to be entered to allow a USB accessory to connect after an hour, is enabled by default. 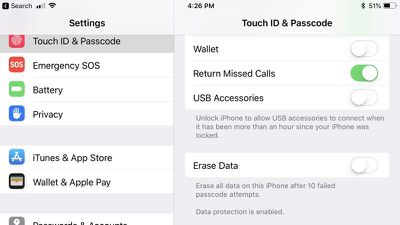 You can toggle off the setting to allow USB accessories to connect at any time, but most users are likely going to leave this set to the default setting as there's not a whole lot of benefit to turning it off. With this turned on, you'll need to enter your passcode for a data connection to the iPhone using a USB device, such as when you connect it to iTunes on a computer, but charging via the Lightning port will continue to work fine.

The new setting is of interest because it's an expansion of USB Restricted Mode, a feature Apple toyed with during the iOS 11.4 beta. USB Restricted Mode was designed to disable USB access to the Lightning Connector after 7 days, but iOS 12 cuts that time period way, way down.

Law enforcement officials use USB access to an iPhone or an iPad to connect accessories like the GrayKey box, a tool that plugs into the Lightning port of an iPhone and uses the data connection in an attempt to brute force a passcode.

With the new setting, an iPhone's Lightning port data connection will not work with the GrayKey box if it's been more than an hour since a passcode was entered, rendering it effectively useless unless used immediately after an iPhone is obtained from a suspect.

Law enforcement officials are likely going to be unhappy with the changes Apple is making in iOS 12 because it's going to make iOS 12 devices a lot harder to get into, but from a customer point of view, this setting offers protection from hackers and other bad actors who may be able to get ahold of this kind of technology.

Khedron
In before that guy who's been professionally cracking iOS for a decade tells us he already knows how to bypass this setting.
Score: 57 Votes (Like | Disagree)

Mr. Heckles
This is just awesome! I’m glad it’s an hour and not a week.
Score: 38 Votes (Like | Disagree)

what are you hiding?
i just had a 4 digit pin lol

Banking info, emails, contacts of friends and family, photos, personal info, and more. No one needs to see this info unless I let them. Period.
Score: 28 Votes (Like | Disagree)

justiny
I’m perfectly fine with law enforcement officials being unhappy about this.
Score: 26 Votes (Like | Disagree)

Robert.Walter
Should also be triggered when a phone is put into SOS mode and whenever TouchID/FaceID is disabled.

If it’s not doing that, that would seem to be an oversight.
Score: 19 Votes (Like | Disagree)

I was wondering why this was listed under "political, religious, and social issues". I guess this is why, lol.
Score: 15 Votes (Like | Disagree)
Read All Comments