Changes are being made to the Events, Groups, and Pages API to cut down on what apps can see. With the Events API, for example, apps will no longer be able to access attendees or posts on the event wall, and the Groups API will no longer provide member lists or names associated with posts or comments. 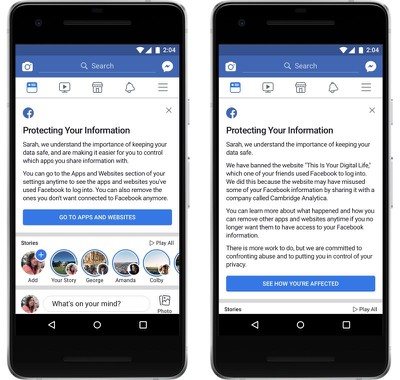 Facebook will also now need to approve third-party access to both Groups and Pages APIs, and, as mentioned previously, all apps that access information like check-ins, photos, posts, and videos. Apps will no longer be able to see religious or political views, relationship status, education, work history, and tons more, all of which was previously readily available.

It is also no longer possible to search for a person's phone number or email address to locate them on Facebook. Facebook says "malicious actors" have used this feature to "scrape public profile information" using data pulled from search and account recovery options.

For Android users, Facebook had been collecting call and message logs to enable Messenger features. Facebook says it will delete all logs older than a year and will upload less data to its servers going forward.

Starting next Monday, Facebook will also introduce a link at the top of the News Feed to let all users see what apps are installed and what information has been shared with those apps to make it easy for less technically savvy users to remove apps.

The Facebook privacy changes come in the wake of the ongoing Cambridge Analytica scandal, where Cambridge Analytica used personal data acquired from Facebook in an illicit manner by a third-party app to create targeted political advertisements during the 2016 election.

DotCom2
This company along with Google are just evil. IMHO
Score: 13 Votes (Like | Disagree)

macusermdm
I deleted my Facebook account a few days ago. Their data handling is concerning, but I just got too irritated with all the negativity and hate on it. I reported, and many other did too, a person threatening to send two teenage girls wearing headscarves back to ‘their’ country in a body bag. Facebook replied that the comment didn’t violate their community standards. I don’t think Facebook has any standards and I don’t need to be part of it.

redneckitengineer
I ditched Facebook in 2011, ditched every social media in 2012. Any company this powerful should be regulated. They may tell the government and you whatever you want to hear to keep you around, but buddy... there’s backroom deals and water cooler chats that you couldn’t imagine happening.
Score: 6 Votes (Like | Disagree)

now i see it
Man someone's really gotta be addicted to Facebook to continue wanting to use it after all this.
Score: 5 Votes (Like | Disagree)

luvbug
Deleted my account, although I hadn't touched it in years. They can make all the changes they want, and say whatever, but I'm sure everything (user information) will still be available for a price, or a court order.
Score: 4 Votes (Like | Disagree)

Monday June 29, 2020 10:31 am PDT by Juli Clover
Apple's Developer Transition Kit equipped with an A12Z iPad Pro chip began arriving in the hands of developers this morning to help them get their apps ready for Macs running Apple Silicon, and though forbidden, the first thing some developers did was benchmark the machine. Multiple Geekbench results have indicated that the Developer Transition Kit, which is a Mac mini with an iPad Pro chip, ...
Read Full Article • 211 comments

Monday June 29, 2020 12:30 pm PDT by Juli Clover
Apple today launched a new Apple Card program and website that are designed to help people who have their Apple Card applications declined improve their credit to qualify, reports TechCrunch. Starting today, declined Apple Card applicants will begin seeing emails that offer the Path to Apple Card program, which is opt-in and can run for four months. It uses the information from the initial...
Read Full Article • 123 comments