As outlined by Emojipedia, Apple has suggested emojis that include a guide dog, a hearing aid, a prosthetic arm and leg, sign language, a person in a wheelchair, and a person with a cane. Apple's full list of proposed emojis can be seen in its proposal document. 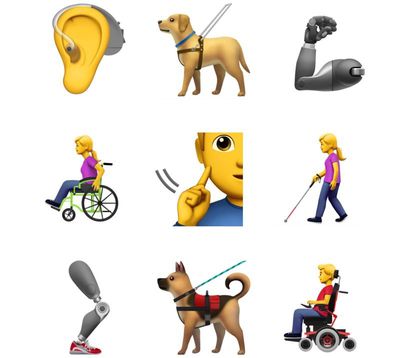 Image via Emojipedia
In its proposal, Apple says it is aiming to better represent individuals with disabilities to provide a more inclusive experience for all. Apple also says this is not an exhaustive list of "all possible depictions of disabilities," but is rather designed to be "an initial starting point."

At Apple, we believe that technology should be accessible to everyone and should provide an experience that serves individual needs. Adding emoji emblematic to users' life experiences helps foster a diverse culture that is inclusive of disability. Emoji are a universal language and a powerful tool for communication, as well as a form of self-expression, and can be used not only to represent one's own personal experience, but also to show support for a loved one.

This new set of emoji that we are proposing aims to provide a wider array of options to represent basic categories for people with disabilities. This is not meant to be a comprehensive list of all possible depictions of disabilities, but to provide an initial starting point for greater representation for diversity within the emoji universe.

To create the emoji suggestions, Apple teamed up with the American Council of the Blind, the Cerebral Palsy Foundation, and the National Association of the Deaf. Its initial proposal focused on people in four categories: Blind and Low Vision, Deaf and Hard of Hearing, Physical Motor, and Hidden Disabilities.

Apple says its proposal is a "significant step forward in representing more diverse individuals," and that the company hopes it will "spark a global dialogue around better representation for people with disabilities."

The Unicode Consortium has already finalized the Emoji 11.0 characters that will be adopted by smartphone companies later this year, but Apple's proposed characters could be added to Emoji 12.0, set to be released in 2019.

The same question was asked when Apple created emojis of people of color. The answer is yes.

While I agree with you, now that we're going down this road, I was happier when Emojis were a non-representational bright yellow. Rather than "emojis for every skin color" we should have stuck with "emojis that aren't any skin color" and things would have been so much simpler. The direction this is headed next is going to be "well, my eye color / hair style / height isn't represented, we must fix that!" They weren't supposed to be portraiture, they were supposed to be indicators of emotions. Sigh.
Score: 16 Votes (Like | Disagree)

... but is this really genuinely needed or something thats been demanded?

Are users with needs for accessibility wanting emojis related to them?

The same question was asked when Apple created emojis of people of color. The answer is yes.
Score: 15 Votes (Like | Disagree)

JohnApples
Oh great. Another emoji article, which means another round of complaining and *hilarious* sarcastic jokes.
Score: 13 Votes (Like | Disagree)

keysofanxiety
“Consortium.” I don’t know why that makes me laugh so much.

I guess it’s because I imagine some strange cathedral surrounded by magnificent gates, glorious and older than time itself. You enter the hall with trepidation and penitence, footsteps echoing and bouncing off the great pillars. In the distance on the farthest wall looms a large circular mosaic-glass, dingy from eons of neglect, casting a muddied veneer on the floor of the hallowed hall.

What little light there is scarcely reveals the shadow of twelve large oaken chairs, arranged in a half-moon around the presentation altar.

In each chair sits an imposing cloaked figure, the Emoji Elder, one more ancient than the other, who cast their unwavering judgement on which Emoji shall come to pass and which shall be cast into the smouldering pit of fire.

“Consortium.” I don’t know why that makes me laugh so much.

The thing of it is, many people know of the Unicode Consortium only in relation to Emoji's, but, while highly visible, that's pretty much the least important part of their work. They are the reason we have a single standard character set that works for every language, rather than the code page hell that was the 80's/90's. They are the reason you can exchange documents written in multiple languages between machines all over the world without getting complete gibberish on the receiving end. Emoji are just a tiny sideshow, but, sadly, they get all the press because people like cute little pictures, and news providers know articles on Emoji get tons of pageviews and comments.
Score: 8 Votes (Like | Disagree)

In 20 years, we all will talk in a new Emoji language. No English needed.

They have that. It's called Chinese.
Score: 8 Votes (Like | Disagree)
Read All Comments