HomePod reviews from the tech press came thick and fast last week, and while the smart speaker's sound quality was consistently praised, most reviews were based on subjective assessments and didn't take into account professional-grade output measurements. Early on Monday, however, Reddit user WinterCharm posted exhaustive audio performance testing results for HomePod to the Reddit audiophile community. 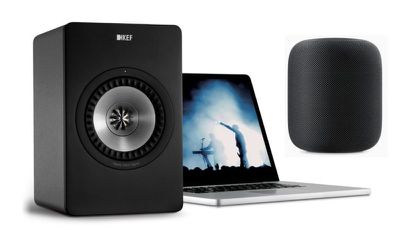 Using specialized equipment and a controlled testing environment, the review features in-depth analysis of the smart speaker's output when compared to a pair of $999 KEF X300A digital hi-fi monitors, representing a "meticulously set up audiophile grade speaker versus a tiny little HomePod that claims to do room correction on its own".

As expected, WinterCharm criticized the HomePod for its AirPlay-only output limitation and Siri's often-lackluster performance as a virtual assistant, but the speaker's audio quality appraisal was a different story. Interested readers can check out all the details and technical minutiae here, but in short, WinterCharm offered the following summary after a battery of exhaustive tests.

I am speechless. The HomePod actually sounds better than the KEF X300A. If you're new to the Audiophile world, KEF is a very well respected and much loved speaker company. I actually deleted my very first measurements and re-checked everything because they were so good, I thought I'd made an error. Apple has managed to extract peak performance from a pint sized speaker, a feat that deserves a standing ovation. The HomePod is 100% an Audiophile grade Speaker.

Do you agree with WinterCharm's review? Let us know in the comments. And make sure to check out our HomePod roundup if you're new to HomePod or planning to purchase one -- it's got everything you need to know about HomePod along with a running list of our HomePod how tos.

His actual graphs show anything but perfectly flat, they show huge peaks and troughs everywhere - which is fine, it's a consumer hifi product and Apple haven't designed it to be flat, they've used every trick in the book to get big sound from a small speaker and to make it sound "wow" when you first play something through it "how is that bass coming from this" - the woofer is plenty big enough to get good bass, but they've gone for psycho-acoustic processing as well to make it even bigger.

To be honest this sort of sound is going to work well for most people, it's the sound signature they're used to. The way sound is presented only starts to change if you listen on studio monitors which are designed to be neutral flat and revealing - many people may find that sound "boring" or overly "clinical" compared to a HomePod type sound though. But when you get into the £300+ headphone market that is what they try to do as well, the £1000 Sennheiser HD-800's are more or less as flat as you can get in a headphone. The idea being to just present the music in as much detail as possible as it was from the studio without applying any sort of EQ curve or enhancement to it in anyway.

But it's a bit like getting a high end TV calibrated - some people watch with the shop "vivid" mode on their TV and some people want a perfectly calibrated TV. Many people would think the calibrated one looks flat, boring and too yellow, yet it's the accurate representation of what the original picture is. Horses for courses - depends if you want hyped or accurate, you can't have both.

The HomePod is a perfectly good "hyped" speaker, but it is anything but revealing, clear, detailed, open, transparent, flat, bright or even top end hi-fi. It does however sound better than 90% of the stuff most people will have heard or bought before, which is all Apple needed to do (and yes it destros the entire Echo range and easily puts Sonos to shame, not that i'd ever want to listen to either for extended periods)
Score: 86 Votes (Like | Disagree)

Rogifan
How does one become an audiophile? Is it something you go to school for or does it apply to anyone who spends a lot of money on audio gear?
Score: 53 Votes (Like | Disagree)

Ted13
There is going to be a lot of denial of the obvious before everyone else starts frantically trying to emulate the HomePod, just like they did the iPhone.
Score: 33 Votes (Like | Disagree)

lkrupp
As usual the “experts” here are trashing the HomePod. Reviewers are dead wrong, audiophiles are paid shills, the HomePod has been pre-failed on MacRumors. Just another day in this forum.
Score: 23 Votes (Like | Disagree)

johngordon
I don't care what a flat frequency response even is.

I'm no audiophile, but I can tell when something sounds a bit crap, and do invest on some decent headphones for my phone. Currently have some Bowers and Wilkins P3s, which certainly sound way better than the supplied EarPods.

Have only had the HomePod for a few days, but it sounds pretty impressive to my non audiophile ears. Really great bass without any distortion, even at high volumes, great separation in the music, and really crisp sounding. I'd describe it as warm sounding, compared to cheaper speakers which can sound a bit cold and brash.

I've been trying to listen to things that might show that all off, so things like Slave to the Rhythm by Grace Jones, or Medicine Show by Big Audio Dynamite, or something like No Surrender live by Bruce. All sound incredible to me.

I'm really not fussed about Siri's supposed shortcomings - for us its just a great way of playing our music in the kitchen / dining room through a great sounding speaker. For the sound quality of this thing alone, there's no question its worth £319.
Score: 20 Votes (Like | Disagree)
Read All Comments

Thursday September 29, 2022 12:38 pm PDT by Juli Clover
Tony Blevins, Apple's vice president of procurement, is set to depart the company after he made a crude comment about his profession in a recent TikTok video, reports Bloomberg. Blevins was in a video by TikTok creator Daniel Mac, who was doing a series on the jobs of people he spotted with expensive cars. After seeing Blevins in an expensive Mercedes-Benz SLR McLaren, Mac asked Blevins what ...
Read Full Article • 632 comments