Yesterday Snapchat announced its first-ever live television event coverage, aimed at key highlights coming out of the 2018 Winter Olympic Games. Today, the company is revealing an enhanced version of its custom Geofilters with a new paid "Create Your Own Lens" studio that lets users build and edit their own personalized selfie Lenses for major events and parties. 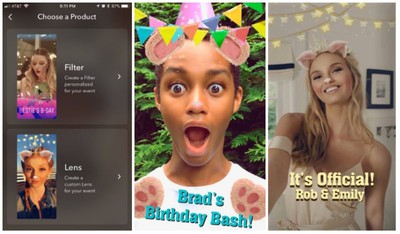 Snapchat's "Create Your Own Lens" on iOS
Available today in the iOS app and on the web, the new section of Snapchat will allow users to create their own custom selfie Lenses and Filters, which friends and family members within a designated location will then be able to use in their own Snapchat apps. The studio includes over 150 templates at launch, amassed from Snapchat's well-known selfie Lenses and Filters that have previously appeared in the camera section of the app.

"Create Your Own Lens" on the web
Users will be able to navigate to "Settings" in the iOS app, select "Filters and Lenses," choose their desired Filter or Lens, customize it with text, enter the time of the event with the location, and checkout at least three hours before the event begins. The company said that prices for each creation start at $9.99, and vary due to factors like location size and duration. As of now, Snapchat is keeping the Create Your Own Lens studio aimed at consumers only, and noted that brands trying to use it for advertising purposes will not get their submissions approved.

In the same update, Snapchat users on both iOS and Android will begin seeing new caption styles today and a new user interface to go along with them. Previously, Snapchat had two styles -- a bar of text and resizable text -- but now users will gain access to Brush, Italic, Glow, Gradient, Rainbow, Fancy, Old English, and more. Caption styles will now be located under the text entry field in a horizontal bar that users can swipe through to choose their preferred text option, and two different styles can be placed on the same Snap.

Snapchat's series of updates this week come after the company announced that it increased to 187 million daily active users in the fourth quarter of 2017, up from 178 million during the third quarter. Snapchat has been fighting to gain new users after rival Instagram introduced its own Stories format in 2016, and in September 2017 Instagram reached 500 million daily active users (for both traditional posts and Stories).

iOS users should start seeing the new update rolling out to the Snapchat app [Direct Link] throughout the day.